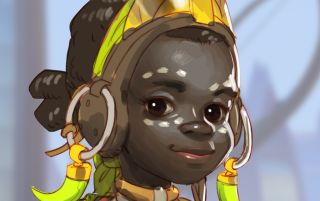 If the comics and digital shorts aren't enough to fill the gap in your Overwatch-loving heart created by its lack of a story mode, then here's some good news: Not only is there going to be an Overwatch novel, it's the first in a series.

The Hero of Numbani will be written by Nicky Drayden, author of The Prey of Gods as well as the Guilds of Ravnica and Ravnica Allegiance stories for Magic: The Gathering. It's about Efi Oladele, the child prodigy who created the robot Orisa. According to the plot summary on Amazon, it will tell the story of how Efi was inspired to build Orisa to protect Numbani after seeing Doomfist attack the city's security bots. Lúcio features in the story as well.

The Hero of Numbani will be published by Scholastic in May of 2020.