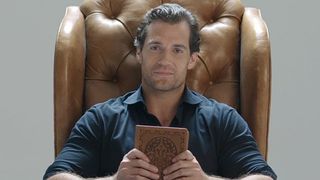 Henry Cavill is about to show the world how he fares in the role of Geralt of Rivia: Netflix's series The Witcher premieres tomorrow, December 20. But playing one of the most beloved characters in video game history isn't Cavill's first brush with gaming—in fact, in this interview he gave to GQ, Cavill says he prefers staying home and playing games rather than receiving all the attention he gets when he leaves the house.

"At home, I get to sit playing games for ridiculous amounts of hours and escape there," he told GQ, "because going outside has the opposite effect."

Cavill says he grew up playing games like Delta Force and Half-Life, and even hosted LAN parties at his childhood home. He's played Total War: Warhammer 2 six times. "With six different races!" he said. "And I love it each time!”

He's also, appropriately, a fan of The Witcher 3, which he says he's played through several times, once on the hardest difficulty—though that was a challenge. "I just ended up dying at the wrong points and thinking, I should not have left the roads. I don’t know why I left the roads," he told GQ.

And when he learned Netflix was creating a show based on The Witcher, Cavill jumped at the chance to play Geralt. He read The Witcher novels (which he originally thought were based on the games, and not vice-versa) after his first meeting with the show's creator, Lauren Schmidy Hissrich. Once cast as Geralt, Cavill lobbied for the inclusion of more of Geralt's magic powers in the show. "I really wanted to push that in there, because for me the audience must know he can do these things. It mattered to me, because it’s all part of being a Witcher."

Sure, the timing of this interview feels a bit like a PR strategy to warm up prickly gamers and Witcher fans who might still be feeling a skeptical about The Man of Steel playing the grizzled Geralt. But that doesn't mean it's not all true, and it's nice to hear Cavill is invested in the role, and in PC games, too.