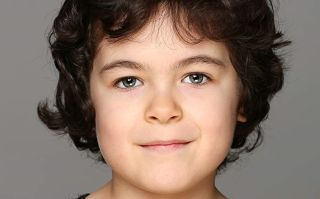 Geralt of Rivia will be portrayed by Henry Cavill, famous for portraying big hero-type characters including Napoleon Solo and Superman, in the upcoming Netflix Witcher series. In the eighth episode of the series, as noticed by fan site Redanian Intelligence, Geralt will also be portrayed by Tristan Ruggeri, a cherubic young lad who will become, at least briefly, "Young Geralt."

Unlike Cavill, Ruggeri isn't famous for any previous roles, because he apparently doesn't have any: IMDB lists The Witcher as his first and, so far, only credit.

It's quite a way to get started. Unlike, say, Young Indy or Young Frankenstein, Young Geralt's childhood wasn't exactly sunshine and lollipops. Witchers aren't born, you see, they're made: The superhuman reflexes, funky night vision, increased strength and endurance, and other such enhancements are the result of various rituals and potions that young Witcher candidates are subjected to before their training begins.

A big hump in that process is the Trial of the Grasses, in which candidates consume a concoction of alchemical ingredients known as "the grasses" in order to force the necessary physical mutations. The UK edition of The Witcher novel Blood of Elves (via The Witcher Wiki) describes it thusly:

Hitherto agitated by a sudden madness, he fell at once into deep stupor. His eyes took on a glassy gaze, incessantly with his hands did he clutch at clothing, or brandish them in the air as if desirous of catching a quill. His breathing grew loud and hoarse; sweat cold, clammy and malodorous appeared on his skin. Then he was once more given elixir through the vein and the seizure it did return. This time a nose-bleed did ensue, coughing turned to vomiting, after which the male weakened entirely and became inert.
For two days more did symptoms not subside. The child's skin, hitherto drenched in sweat, grew dry and hot, the pulse ceased to be full and firm — albeit remaining of average strength, slow rather than fast. No more did he wake, nor did he scream.

Finally, came the seventh day. The male awoke and opened his eyes, and his eyes were those of a viper...

Also, the trial kills seven out of ten children who undertake it, usually after a few days of agonized suffering, because that's how it goes in The Witcher.

The specifics of Ruggeri's appearance haven't been revealed yet, but it will presumably involve flashbacks of some sort, and possibly a deeper dive into Geralt's past than we've gotten from the games. The Witcher Netflix series is slated to roll out later this year.