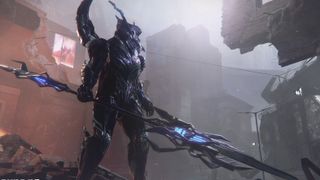 The Surge 2 is hard, obviously. As a unique mix of Soulslike and Metroidvania, the one thing you know for sure is that you’re going to die a lot and it’ll usually be your own fault. That’s why you need some of those good Surge 2 tips to get you started, otherwise, how will you know what to do? Lord knows you don’t want to fumble around in the dark as we did. Come with us into a magical world of The Surge 2 tips, where you can get a robotic leg up on the competition, before chopping off the legs of your foes.

This is kind of the whole thing with The Surge 2, but it’s really important. Once you’ve locked onto an enemy, flicking the right stick will allow you to change which part you’re targeting. Blue areas are unprotected and will take additional damage, but cutting them off won’t reward as much loot. Yellow areas are armoured and cutting them off will get you the schematic for that piece of armour as well as some crafting materials. Plus, destroying armour on a boss makes them more vulnerable and even limits their move sets.

Parrying is always a little tricky, but in The Surge 2, it’s an essential skill. If you equip the Directional Parry Analyzer Implant, then you’ll get a nice warning to show which direction to parry in. You need to hold the block button then flick the right stick in the direction of the attack just before it connects to parry properly. Doing so will allow you to deal a huge amount of damage and will make most fights far easier.

Jericho City and its various districts are huge and sprawling. Secrets and shortcuts are absolutely everywhere, so take your time exploring. Try to explore every nook and cranny for new equipment, crafting materials, and routes as you adventure around. The same pace should be applied to fights too, spend some time dodging your opponents and watching their attack patterns before engaging properly, it’ll save your life.

Tech Scraps are the souls of this universe, you buy thing with them, upgrade things with them, and level up using them. If you die, they end up in a package that’s left where it was that you died. You can avoid this by using the Medical Bays and banking your Tech Scrap; this lets you save for the level ups that get far more expensive as you get further into the game.

That being said, leaving a nice pile of Tech Scraps behind does have its benefits. The pile you leave behind will stick around for a couple of minutes before disappearing. During that time, it will emit a healing pulse that will regenerate your health if you’re close to it. Better yet, it will heal you when you pick it up. This can really help with some of the tougher boss fights, and the healing is magnified depending on how many scraps there are, so sometimes it pays to leave your stuff lying around.

Throughout the world of The Surge, 2 are a bunch of destroyable boxes. Sometimes these are plain wood; other times they are black with white writing on. Either way, they often hide secrets. The former often have items concealed within, while the latter usually denotes a shortcut of some kind. Make sure to poke around them, and you’ll be rewarded.

One of the things you’ll come across in your journey are these strange swarms of Nanites with a pillar of light in the middle. If you go up to these, you’ll see an Echo, which will show you some story beats from the past. That’s not all they do though if you wait around after the Echo has finished a chest will appear that will have some kind of weapon inside. Early on in the game, these are very powerful and well worth the small amount of time required to get them.

This is a simple one, make sure you actually charge your injectables. Injectables are your healing items, but if you don’t use the battery power you’ve built up to charge them, then they’re useless. Don’t forget to actually charge them. Otherwise, you’ll die.

On a related note, make sure to take some charges into each boss fight. Just go around before the boss fight (assuming you know where it is because you died the first time) and fight a few of the weaker enemies to build up your battery power. It’ll give you the best possible chance of success for each boss fight, and some of them are long, so you won’t want to do them more than once.

You’ll occasionally come across enemies that have a red skull next to their health bar, fighting them seems like something you should avoid, but that instinct is wrong. These are Revenge Enemies, which is basically what happens when a normal enemy kills someone else who has played the game. They appear somewhat randomly in-game and killing them off nets you a boatload of crafting materials. Push down that fear and fight them; it’s well worth it.