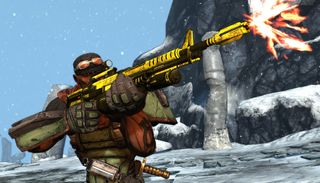 With Borderlands 3 on the horizon (it's arriving in September, which is already closer than you think), it's not a bad time to get acquainted, or re-acquainted, with the original. Well, a newer version of the original, anyway. Borderlands Game of the Year Enhanced is free for the weekend on Steam, which should give you enough time to sample at least a quarter-bazillion of the co-op shooter's 'bazillion' guns.

The Enhanced part relates to the upgraded character models, environments, and textures, plus it somehow adds even more guns and loot than there were to begin with. The Game of the Year business means all the DLC is included, too: The Zombie Island of Doctor Ned, Mad Moxxi's Underdome Riot, The Secret Armory of General Knoxx, and Claptrap's New Robot Revolution.