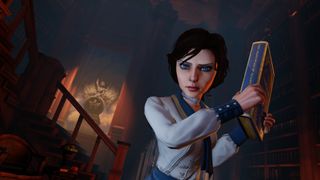 The last ten years have witnessed an incredible evolution in the games that we play. The mainstream industry has switched from producing primarily linear experiences to massive, hugely detailed open world. Indie gaming has exploded, producing hundreds of wild and weird experiments, as well as some of the best PC games ever. We’ve also seen plenty of surprises, such as the proliferation of survival games, the second generation of immersive sims, and the blockbuster return of some classic franchises—X-COM, Elite, DOOM.

But the last ten years has also been surprising in the events that didn’t happen. The incredible games which didn’t get sequels, the ideas that could have revolutionised the industry, but didn’t. The games that could—perhaps should—have been great, but weren’t. The games that never launched in the first place. Let’s come together and pour one out for the missed opportunities of the decade.

When it launched in 2013, Bioshock Infinite was the most anticipated game on the planet. Irrational’s follow-up to one of the most critically acclaimed games ever made appeared to be even more ambitious than its predecessor. The early response to its launch seemed to confirm this. Infinite reviewed well and it sold brilliantly. Everything about it seemed to confirm that Bioshock had a bright future through the 2010s.

Seven years on, and we’ve only just got word that 2K will be making another Bioshock game. Where did all that potential go? Ironically, the ambition of Infinite is what temporarily killed the franchise. After launch, Irrational Games underwent a massive restructuring, laying off around 80% of its staff. Ken Levine stated that creating Infinite, which was a long and troubled project that itself saw some drastic restructuring before release, had been too stressful. He wanted to make smaller, more experimental games instead.

As for why 2K didn’t source another developer, well, Infinite was a linear shooter at a time when games were pushing toward open-world experiences. It’s also a series with huge expectations on its shoulders, and perhaps 2K felt it didn’t have a studio with big enough boots to fill them. Either way, hopefully Bioshock will play a more significant role in the coming decade.

I thought Shadow of Mordor would change open-world gaming forever. Its dynamic Nemesis system essentially let players create their own quests, as they sought to wrest control of Mordor’s Uruk population by manipulating their social hierarchy. It let you choose your own assassination missions, then suffer the consequences as your eliminated target came back from the dead, battle-scarred and battle-hardened.

While many open-world games are essentially amusements parks, where you can choose the order of the rides you go on but the experience is more or less the same, Shadow of Mordor is a proper sandbox, its systems coming together to generate truly unique experiences for players. To me, it seemed like a defining moment in open-world design.

Apart from its bigger, inferior sequel Shadow of War, however, no other game has even tried to replicate the Nemesis System. I’m baffled as to why. Maybe it’s too complicated to reverse-engineer, or not worth the trouble compared to other, simpler open-world structures. Either way, I think open-world gaming really missed the Oliphaunt in the room on this one.

Probably the best horror game of the decade, Alien: Isolation succeeded in making a forty year-old rubber monster scary again. The notion of having the player stalked by a single, specific enemy across a 15 hour game sounded impossible to pull-off on paper, but through a combination of excellent visual and sound design, alongside some wizardly AI, Creative Assembly not only made an excellent horror game, but the single-best bit of Alien-related fiction in thirty years.

But the core idea of Isolation has potential way beyond the Alien franchise. Imagine a Terminator game where you have to evade a Cyberdyne Systems model 101 as it hunts you through an open-city, or a Predator game where you’re hunted by that invisible Alien through a Crysis-like jungle? You could create an Isolation-style game with virtually any classic horror monster.

Unfortunately, nobody has picked up the Isolation baton, not even Creative Assembly, who didn’t follow-up Isolation with a sequel, presumably because it didn’t sell enough copies. Let’s hope the 2020s at least give Amanda Ripley a second chapter to her story.

Sadly, it released in a shocking state. Patently unfinished, with sluggish shooting, dreadful AI, and bugs that were far more terrifying than the Xenomorphs you were supposed to shoot, Colonial Marines was one of the worst mainstream releases of the decade. Thank goodness Creative Assembly gave us one decent Alien game.

Somewhere out there is an alternate universe where Bulletstorm got the reception it deserved (along with a couple of sequels). I'd argue it's a better universe. People Can Fly’s overtly dumb yet secretly smart FPS is one of the most riotously fun games released this decade. It’s skillshots system, which encouraged players to kill enemies not just efficiently but creatively, was an ingenious concept, one that it doubled-down on with some of the most inventively designed weapons of any FPS. It has a gun that fires drillbits, for goodness sake.

Bulletstorm is Tony Hawk’s Pro Shooter, and I can only imagine the influence that notion might have had on FPS design had it sold gangbusters. Sadly, it sold terribly, and the idea of a more creative FPS was consigned to being a footnote of 2011.

I have huge admiration for how Square Enix brought Deus Ex back from the dead. But man, they made a mess of Thief. I like what some of 2014’s Thief does. I Iove crawling along the rooftops of its bleak fantasy city, breaking into houses and nabbing every shiny thing in the place using my ridiculously detailed hands (seriously, Garrett has lovely hands).

As a stealth game, however, Thief is weak. The open-city feels only half-complete, with a confusing layout and a handful of side mission that feel weirdly wedged into the game world. The main missions, meanwhile, are depressingly linear designs, with none of the subtle ingenuities of Looking Glass’ best creations.

I would have loved to see Thief get the same rebooted success as Deus Ex did. Sadly, it wasn’t to be, and I fear never will be again. Goodbye Garrett, you deserved a better send-off.

On the subject of stealth games, what the hell happened to Splinter Cell? In 2013 we got Splinter Cell: Blacklist, a decent chunk of sneaking despite the fact it turned Sam Fisher into a thuggish, miserable git. The only time we’ve seen Fisher since is in a cameo for Ghost: Recon Wildlands. That’s almost seven years without a game to call his own.

In the absence of any reasons why Fisher has gone dark for the best of a decade, I can only speculate. Given their fondness for open-world games, I would imagine Ubisoft tried to adapt Splinter Cell to that format, but struggled to make it work. Alternatively, perhaps Blacklist didn’t sell as well as Ubisoft hoped, and they decided to put to the franchise on ice for a while.

Either way, it’s been far too long since I last saw three green lights glowing in the darkness. It’s time to bring Fisher in from the cold.

I couldn’t write this article without including possibly the most infamous cancelled game of the last ten years. A sequel to the 2006 FPS, Prey 2 was pitched as an open-world, free-running sci-fi adventure in which you play a bounty hunter working in a dangerous, dystopian alien city.

It’s still an idea that gives me goosebumps. In fact, I recently went back and watched some of the gameplay footage. I hoped that it would look old and ropey, so that I would be able to finally deal with this silly longing for a game I’ll never play. Annoyingly, it still looks fantastic. That rainy, neon-drenched city still buzzes with life. The slick, punchy gunplay looks fantastic, and the multiple ways you can approach individual quests seems innovative even today—such as shooting a client’s bodyguard to intimidate them into divulging information on a bounty for free. It is, unfortunately, a game I would still love to play. Surely this has got to be the biggest missed opportunity of the decade.