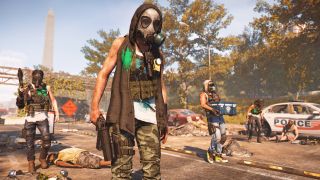 I enjoyed spending a few more hours with The Division 2 private beta at the weekend, having previously played about four or five hours of it earlier this month at a Ubisoft event. I tried a mix of solo and co-op, and found the game to be a lot kinder to players of the former option than the previous Division was.

While the beta obviously wasn't perfect on PC—I had a few noticeable instances of melee enemies teleporting when I was trying to line up a shot—it was otherwise enjoyable and generous, packed with enough activities to fill a weekend if you wanted it to. The matchmaking is slick and fast, and the story and side missions in these early levels throw up plenty of great set pieces.

I only wish I could carry my progress over to the main game so I didn't have to complete some of these missions for the third time. That'd be a big ask for a private beta, but hey. Woe is me.

My only complaint is that the Washington DC setting isn't terribly exciting when you're outdoors—at least not yet. Some of the interiors are really cool—the lobby of the Grand Washington Hotel, for example, or the wrecked Air and Space Museum locale I played in the preview build, where you have a shootout against the Black Tusk faction in the damaged planetarium—but outside, where you spend a lot of time, to me it lacks a little atmosphere compared to the first game's New York. It contrasts nicely, for sure, and it's picturesque at times, but to me, as someone not really familiar with either city in real life, there's an atmosphere New York had that this doesn't yet.

Maybe it was because of the snow, or the constant globally recognisable landmarks, or the imposing, empty skyscrapers, which all contributed significantly to the feel of the first game's world. Or maybe it's because New York's iconography is arguably more prominent in popular culture than DC. To me, these streets feel a little repetitive, like I'm surrounded by offices and residential buildings at all times.

It's definitely picturesque in places—here are some great screenshots taken in the game's photo mode by user KDKate, shared on Reddit—but to me, it lacks a little flavour in what we've seen so far. It's important to caveat that the beta only shows us a small percentage of the map—I'm excited to see some of the swampier surroundings elsewhere in DC.

The Dark Zone fares better, and the beta offers just one of three of the areas you'll be able to explore. Here, the world is overgrown, everything has a green hue and looks more like it's suffered an actual apocalypse than the other places on the map. That first step into the Dark Zone feels like an even bigger departure than it did in the first game.

I look forward to seeing the rest, and hopefully being surprised. If you want a first look at The Division 2's Washington DC, it's likely to have an open beta before launch on 15 March.