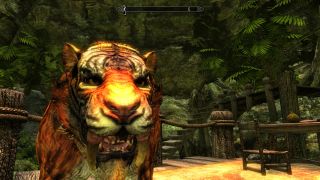 I've crossed a desert, forded a river, fought blue lizards and green spiders, and finally made it to Elsweyr. I'm greeted by a muscular tiger, prowling around on all fours, who introduces himself with polite gravel and welcomes me to the home of the Khajiit. This is Moonpath to Elsweyr, one of the first quest mods ever made for Skyrim.

Back in 2012 when Bethesda's Creation Kit was released, the mod scene exploded. It's cute to look back on how we reported it at the time: "Not enough goats? Download the goat summoning mod. More dog eyebrows? Mod some in. Giants not big enough? Download the bigger giants mod. Skyrim is going nuts. In a very good way."

Of course people made mods even without the Creation Kit, but it brought ambitious, sweeping changes within reach of anyone willing to dig through its wiki. It was a particular boon to quest mods like Moonpath to Elsweyr, which appeared so suddenly people were convinced it had been in the works before the Creation Kit was released. But no, modder Tomas Sala, who released Moonpath under the name "muppetpuppet", was able to quickly make multiple new locations, creatures, and fully voiced questlines solely using the Creation Kit. He did have one advantage, though—over 10 years of experience as a 3D artist and developer.

"It was sort of an escape from the work-for-hire game jobs I was involved in at the time," he says, "a creative release. I actually found out that quite a few notable modders were industry veterans as well."

It was his first mod and although it would be eclipsed by later ones with pro-level writing like Enderal and The Forgotten City, it's still fun to go back to. It's been updated for Skyrim Special Edition too, which is nice. I like being able to play it in a version of Skyrim that doesn't freak out when I alt-tab away from it.

Moonpath begins with a caravan trip from Falkreath, following the hidden byways of the Khajiit. The central location is a player home in the waterways of a jungle canyon, but later on you get access to a skyship captained by a Khajiit pirate complete with terrible accent who ferries you to a tropical island ruin.

Sala is very aware his mod has flaws, because he made it up as he went along. "I started off with a player home as a test, and that become a hub for a string of exotic adventures. But none of it was planned, and it was all uploaded piecemeal as soon as it was playable. Which gives the entire mod a very haphazard and linear feel."

It became popular fast, which was good and bad. As he explains, "there was so much feedback and commenting, which can be intoxicating as well, just the general high of being in communication with your users. But it also led to me forgetting what I had done a lot, 'hmmm where did I put that overpowered katana I used for testing? Oh well, nobody will probably find it', which caused quite a few raised eyebrows amongst players."

Sala stepped away from modding during the paid mods controversy. Now he focuses on his own games, with an indie project called The Falconeer in the works. "There were people creating popular mods in their spare time whose lives would have been altered for the better if they could make this their profession," he says, "literally lift them from a struggling menial job situation. And they were being harassed, with some even claiming mods were the property of the community not their creators."

Mooonpath has an important place in the history of Skyrim modding. Its monsters, trees, even the airship have all been reused in other mods. It's even been incorporated into Legacy of the the Dragonborn, a mod that adds a museum dedicated to the player's victories which you slowly fill with Skyrim's unique quest items. There are entire rooms dedicated to daedric artifacts and books, and a display that unlocks when you finish Moonpath—a little shrine that makes it feel as significant as any of the game's official questlines.

Sala's modest about his achievement. "I had the most fun with the environments," he says. "I think the best description for the Moonpath is 'a holiday away from icy Skyrim'. It's more of a tour of cool locations than anything else."

Moonpath to Elsweyr is available for both the original Skyrim and Skyrim Special Edition.