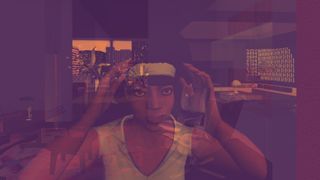 Sunset is a first-person game where you play as the housekeeper of a bloody great penthouse apartment, in the fictional South American city of San Bavón. It's set in the 1970s, which might be why it looks so stylish, and Journey composer Austin Wintory is doing the music, which might be why it sounds so nice. Chris Livingston previewed it a few days ago, and if that whet your appetite for Tale of Tales' intriguing, combatless war game, I have a new trailer for you to watch.

Actually, it's at the top of this post, so you probably already watched it. Oh well. Still: Sunset's looking pretty good, isn't it? I particularly like the ginormous, '90s-FPS-size rooms of the luxury apartment you're sent to look after, which are going to be a right nightmare to clean.

Tale of Tales' previous credits include The Path and the incredibly French Bientôt l'été, so you probably know by now if this is the sort of thing you'll enjoy.