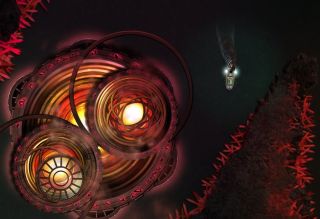 Sunless sea is Failbetter's very promising adventure game about exploring a vast subterranean ocean. It's been on Steam Early Access since June, which has given early adopters the chance to point out that the old combat system—a sluggish, static affair in which you slowly deploy skills to deal incremental damage—was letting the whole thing down.

Today's "Steel" update is the response, the first iteration of a real-time combat system that has you maneuvering to keep the enemy in range before delivering killer blows with your ship's weapons. Combat rewards have also been retuned to make it less likely to drive your crew to insanity, though it's early, so expect limited animation, sounds, and monster attacks.

The update also adds ten new islands, with their own stories to discover. The finished version will shuffle many, many islands into the randomly generated ocean. Each one hosts a little text adventure that conveys rewards and reveals more about the strange isolated societies that have appeared in the wake of London's cataclysmic fall into the sinister underground sea. The writing matches the evocative, deeply mysterious style of Failbetter's last production, Fallen London.

Sunless Sea is remains in early access on Steam, and can also be bought via the Humble store.