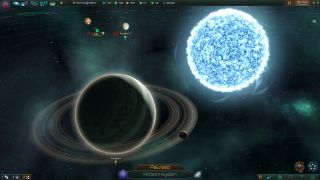 Paradox strategy games have a habit of layering complexity so thick that I often don’t discover really useful mechanics until 10, 20, 50, or even 100 hours in. While Stellaris’ 4X-flavored variant has made significant efforts toward being more approachable, I’ve still experienced moments of “It would have been great to know that before the entire population of my colony was annihilated by brain slugs!”

In such a wide open, variable galaxy, the key to victory is understanding all of the options at your fingertips (or claw-tips, or tentacle-tips) and when to use them. The following set of simple pointers will set you on the right track to a galactic empire that runs like a well-oiled glorfblax.

The in-game tutorial is great for a lot of things, but it won’t give you the mission to start colonizing other worlds until you’re maintaining a positive balance in both energy and minerals that you might not hit for a good while. By then, the jerk-face crusader slugs a couple systems away will be in the process of seizing all the prime real estate and planning your annexation.

Developing colonies costs a lot of energy, but it’s okay to run a deficit for a while as long as you have a decent stockpile. You will spend a lot of time in Stellaris in the red anyway. Energy is a resource to balance, not to hoard.  And you’ll make your investment back many times over when you have two, three, or four worlds full of homicidal aardvarks working for your glorious emperor instead of one. You only have a small window to grab that territory without going to war, and you should make the most of it.

Also, keep an eye out for the techs that let you colonize planets one ecological step away from your homeworld. They will have only 60% habitability (meaning a cap of 60% happiness for all pops living there), but that’s not bad enough that people will start rebelling or refusing to work. Their discomfort will be your profit if you can exploit three times as many planets early on.

The empire creator gives you the choice to begin with missiles, kinetic weapons, or lasers. It’s tempting to stick with that choice to build a strong, thematic identity for your race. But being just “The Laser Guys” or “The Railgun Dudes” will get you into a lot of trouble when you meet a rival empire that has the space rock to your space scissors.

If you can, spread out your military research to make sure you have a variety of weapon types available at the latest tech level. At minimum, you should keep up to date on something with good shield penetration (such as torpedoes), something with good armor penetration (most energy weapons), and some overall high DPS (missiles or kinetic weapons will do fine, depending on your preference).

You can either outfit a little of each to every design, creating generalist warships, or maintain multiple, more specialized designs of each ship class and crank up production on whatever will kill your current rivals to death most effectively. Also be sure to always maintain a good mix of weapon sizes. A battleship with all large weapon slots will have a hard time even hitting smaller ships like corvettes, whereas a swarm of destroyers with mostly Small weapon slots will struggle to make a dent in the big guys.

Fallen Empires are ancient civilizations you encounter who control a small area of space and aren’t interested in expansion or conquest. However, they have gigantic fleets equipped with tech that will blast you into space dust until well into the late game. Staying on their good side is very much in your best interests, and it’s not difficult if you know what you’re doing.

There are four types of Fallen Empire you might run into:

Enigmatic Observers are Fanatic Xenophiles. They will leave you alone as long as you don’t enslave or exterminate other races, and may demand your government change its policies to be more benevolent.

Militant Isolationists are Fanatic Xenophobes. They insist on having a permanent buffer zone of uncolonized stars between them and anyone else, and will demand you give up any territory that encroaches on their borders.

Holy Guardians are Fanatic Spiritualists, protecting a number of pristine, high-yield planets called Holy Worlds in the vicinity of their territory. Attempts to colonize these worlds will incur their wrath.

Keepers of Knowledge are Fanatic Materialists and will discourage you from researching dangerous technologies (which you can spot based on their red background in the tech list) such as sentient AI and advanced warp drives that have a chance of tearing a hole in space.

The Fallen Empires will contact you if you’ve offended them, and you have the option to accept their demands or reply with a rude emoji. If the Fallen Empire is far away from you, with many neutral civilizations in the way, you might be able to safely ignore them. If they’re close by, defy them at your peril.