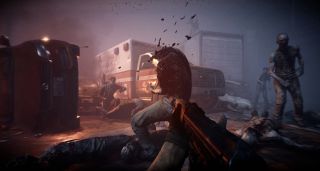 Publisher and developer Starbreeze announced today that it has filed for reconstruction due to a shortage of cash. CEO Bo Andersson has also resigned. This comes not long after Starbreeze told investors that low sales revenue from Overkill’s The Walking Dead meant that it would have to cut costs, but the forecasted revenue has been reduced further and a shortfall was predicted for next month.

Salaries and operations will apparently continue as normal at Starbreeze and its subsidiaries, according to a boilerplate insolvency press release, and while Andersson has resigned as CEO and from the board of directors, along with one other member, there won’t be any other management changes.

“The decision is based on a shortage of liquidity and deemed to be a necessary step to give the Company the time needed to negotiate a long-term financial solution and implement changes in the organisation and operations,” Starbreeze says. “The financial targets for Q4 2018 and 2020 no longer applies.”

Sales revenue from Overkill’s zombie co-op romp was lower than expected> Starbreeze largely blamed its popularity in regions where the game is significantly cheaper, such as Russia and China. The game’s reception was also lukewarm. Our own Walking Dead review noted the shoddy multiplayer and disappointing combat.

Reconstruction is usually a last-ditch effort to avoid liquidation, and Starbreeze will have a limited amount of time to find a solution to its financial woes before bankruptcy proceedings are initiated.