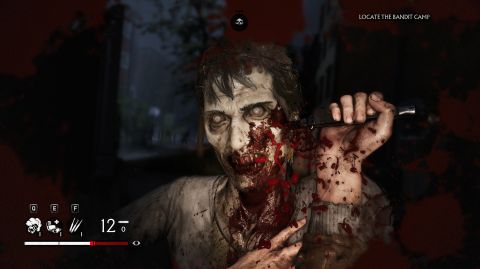 The Walking Dead gets the zombies and the theme just right, but everything else is a mess.

I don't like fast zombies. Call me a Romero purist or just a contrarian, but I've always found sprinting "rage virus" zombies to be less fun and less scary than the classic, rotting animated corpses.

Overkill's long-awaited co-op shooter, The Walking Dead, gets the awful horror of slow zombies just right. Everything great about the game comes from Overkill's devotion to the source material and to zombie horror in general.

Unfortunately, this rendition of The Walking Dead does a lot of things wrong and, for many reasons, isn't worth your time or money right now. Overkill is pushing patches and fixes almost daily, but mission-breaking bugs and server communication problems are still wrecking the love I want to feel for this game.

The greatest enemy in The Walking Dead—besides, you know, the walking dead—is noise. Nothing floods the streets with zombies faster than a loud bang or a jukebox firing up a Queen track. Every mission in The Walking Dead is a stealth mission, at least at the beginning. Structurally, this makes the game very similar to Overkill's previous co-op shooters, Payday and Payday 2. In those games, heists start out quiet until an alarm gets triggered and the only way to get out alive is to go loud.

The Walking Dead uses that same idea to great effect. Killing a few scattered zombies with baseball bats and machetes is easy enough, but eventually someone will make a noise. Whether it's a gunshot, an explosion, or a car alarm, noise brings more zombies. If your team is sloppy, eventually the hoard will get too thick to fight at all, and the only thing left to do is run.

Even though fighting off zombies is pretty simple, nearby zombies can grab anyone who gets too close. Shoving them off takes some time and drains some health, making victims more vulnerable to the next grasping hand. Being mobbed by more zombies can quickly overwhelm players, even those at full health. I love that, true to their lore, one zombie is an awkward dork but multiple zombies are a real threat.

It's too bad that killing zombies with melee weapons is so important, though, because the melee weapons aren't much fun to use. There are machetes, baseball bats, and pickaxes, but they all feel clunky, and more or less the same. Fighting off large hoards becomes repetitive drudgery despite the very satisfying wooden tunk sound I get from smacking a zombie right in the skull.

The story behind the missions will be extremely familiar to any fan of The Walking Dead TV show or comics. Your band of survivors is struggling to find food when they run up against another band of survivors, and soon the violence becomes an extended metaphor for the animal nature within us all, as it so often does in these stories.

Between games, players can upgrade their camp or send NPC survivors out on missions. Successful NPCs working at camp give players in-game stat bonuses or supplies. Sending out survivors was novel at first, but the entire meta-game of upgrading and repairing camp doesn't add much to the fun and is underdeveloped.

I found the chance to upgrade and repair weapons much more interesting and successful. New weapons and accessories can be found throughout most levels, and finding a new shotgun or a scope is a nice reward. Even better, weapons found on maps are physical bundles that have to be carried out of levels, which makes for some tense moments or last-second heroics when one player dives into the hoard to snag the gun bag.

Every mission includes some sort of classic post-apocalypse maintenance problem: an old security door needs batteries and jumper cables to power up, or a forklift needs fuel to lift a barrier out of the way. Some missions involve full-blown puzzles, where team members need to read out code sequences while others type them in to far-away consoles—all while everyone pops zombies in the noggin.

It’s in these moments where The Walking Dead is at its best. Moments straight out of the TV show play out organically, such as when teammates hack their way into a hoard to rescue a friend, or as the seconds tick down toward rescue and everyone is out of ammo. Or when a loudspeaker playing jazz shatters the silence and everyone sprints to turn it off, turn it off!

It's such a shame that I'm about to tell you about everything that's broken.

An otherwise pretty decent game is completely let down by how it handles players, connections, and matchmaking. When I want to play a mission, I click on its map icon and join a long, long matchmaking process that matches me up with other players who also want to play that specific mission on that specific difficulty level. This chops the online player population into dozens of separate pieces. On a Saturday afternoon during the game's first available weekend, I wasn't able to find a party for more advanced missions or higher difficulty levels. The Walking Dead encourages playing and replaying missions, so it's a surprise that there's no option to search for any game at any difficulty level. Just put me in, coach, I don't care where.

I simply can't believe there's no in-game voice chat when teamwork is at such a premium. Trying to type explanations of complicated puzzles between zombie attacks is a huge pain in the ass, and even Payday 2, Overkill's previous game, featured in-game voice chat when it launched in 2013. This is a game that requires more stealth, more teamwork, and more detailed coordination than Payday 2 ever did, and it's a sin that The Walking Dead doesn't have it.

The natural solution to some of these problems—lousy matchmaking and no voice chat—is to show up with a full group of friends and use a third-party voice client like Steam or Discord. That would be a good start, but inexplicably, The Walking Dead breaks up parties between every mission. Inviting players to join your game doesn't work from the map screen. A group I played a few missions with had to invite and re-invite each other at the beginning of each mission.

Load times are long and frequent enough that I kept a book nearby, reading chapters a few minutes at a time. Once in-game, the server connection is frequently rocky. Almost every game I played was marred by some sort of desync issue or game-breaking bug. Once, my teammates asked me to pick a lock on a gate, which would lead to a shortcut through the level. I was the only character with lockpicks in my kit, so I dutifully stared at the gate. There was no lock there. In their game, the gate was closed by a rusty padlock that did not exist in mine.

This feeling—that teammates and I are playing different games—came up often. During a battle, I kept trying to fight zombies that blinked out of existence when I got close. During a dramatic escape, I became invisible to zombies and had to disconnect. During a puzzle sequence, I got stuck on a bench and had to disconnect. I once got frustrated because I was incapacitated on the ground and needed my teammates to help me up, but they were just ignoring me. Couldn't they see I was injured? In fact, they couldn't: according to them, I was alive and standing in the corner. Unable to die and unable to be rescued, I had to disconnect.

As far as I can tell, The Walking Dead has no ability to migrate hosts. If the person hosting the game needs to leave, everyone in the party gets crashed out of the mission. Any bug that forces a player to disconnect could end the mission for the entire team. And on more than one occasion, I was in the final dramatic push of an hour-long story mission only to get disconnected and bounced back to the main menu. According to those error messages, the game itself was having trouble connecting to Steam.

I wanted to love the slow zombies and the apocalyptic nihilism that made me love the source material. But if an online-only multiplayer game is pretty good except for all the online multiplayer stuff, well then it is not good at all. To Overkill's credit, it seems to be pushing out daily updates and bug fixes. Maybe in a few months, when the price has come down and the bugs have been squashed, The Walking Dead might be worth your time. Until then, there are better horror stories in Left 4 Dead, better guns in Killing Floor, and better melee combat in Vermintide—and those games work properly.

The Walking Dead gets the zombies and the theme just right, but everything else is a mess.