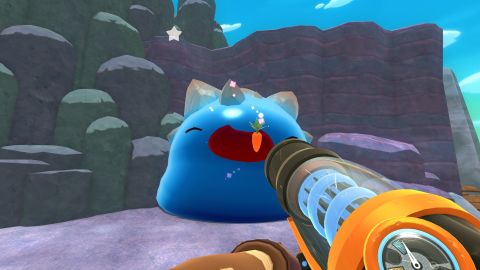 A slight and repetitive but cute farming game, Slime Rancher doesn't quite reach the heights of its sub-genre.

What is it? A cute and colourful farming sim where you rear bouncing slimes instead of cows and cabbage.
Expect to pay £15/$20
Developer Monomi Park
Publisher In-house
Reviewed on Intel i7-2600, 8GB RAM, Nvidia GeForce GTX 1070, Windows 10
Multiplayer None
Link Humble

Slime Rancher pulls off a PR coup that fast food corporations would kill for: it’s battery farming, but adorable with it. Monomi Park's cutesy farm sim has no truck with free-range and GM-free—it’s about cramming as many colourful blobs as you can into tiny pens, gorging them on snacks, then sucking up their plorts (that is, poop) with your vacuum gun and selling it for the highest rate. It’s the kind of horror show that has you hankering for that chlorinated chicken you keep hearing about. On the other hand: ahh, look at their little faces.

Getting your slime prison operational is pretty straightforward. Venture out into the wild and you'll find all manner of slimes oozing out of the landscape. They're so abundant and simple to catch, in fact, that you can practically fill all four of your gun's storage canisters in the first 15 minutes. Managing your captives proves trickier. Should the dumb blobs devour the turds of a different species, they mutate into a hybrid, potentially causing havoc and disrupting your operations.

While force-feeding slimes their own effluence has its benefits—the hybrid ‘largo’ slimes will squeeze out two plorts for the price of one come feeding time—it can’t be left unchecked. Throw a third, foreign plort into the mix and the largo morphs into an all-consuming tar monster that won't stop eating until it's devoured your entire ranch, proving that even slimes can only take so much shit before they finally snap.

The meat of the challenge, then, is breeding your slime horde in a desired direction without letting them succumb to madness. Needless to say, infant schools won’t be taking trips to this farm. Compared to a Stardew Valley or Harvest Moon, where the task is one of time management and efficient routines, Slime Rancher captures the anarchic world of livestock: your resource isn’t just a number on the spreadsheet, but a chaotic living thing capable of dicking you over.

There are plenty of provisions to help prevent this, though. You can build higher walls on your corral to keep slimes penned in, add a net to stop them bouncing out the top, and even lull them into a stupor with a tinkling music box. You can also unlock extra areas to further segregate different breeds, which is essential once you start raising the exotic quantum slimes that can teleport out of their pens.

Slimes have their own particular diets, too, so building enough vegetable patches, chicken coops and fruit trees is vital to keeping stomachs full and your pockets lined. Speed upgrades are available, but I found these accelerated cycles were often at odds with the time I wanted to spend adventuring and pushing out into newly unlocked territories. It never got to the point where I'd come home to piles of rotting produce, but efficiency often came at the cost of further exploration.

Admittedly, you can't go far in the game's early hours, as five of its six main areas are fenced off. To progress, you'll need to find the resident giant 'gordo' slime and stuff its giggling pie-hole with so much food that it bursts to reveal the key. I’m not sure this has a real-life equivalent in my battery farming metaphor.

Once you get there, though, you're essentially going through the same motions as you were an hour ago, just with different coloured slimes in a slightly prettier landscape. And that's the main problem I have with Slime Rancher. Unlike Stardew Valley, where you can personalise your farm to the nth degree or settle down and start a family, there's nothing to do here except shovel endless quantities of poop and make a quick buck. Farming isn’t the means to a narrative end here, but a means to more endless farming. You buy upgrades because you can rather than because you want to, and once you've filled out your pens with profitable slime, there's little incentive to venture back outside.

Even the unlockable research lab didn't provide the extra longevity I'd hoped for. Instead of improving the minute-to-minute farming process, the lab simply lets you build extra gadgets to place around the planet. Most, however, like the med station and spring pad, are largely superfluous. My health, for instance, rarely dipped below 70 even when I came across a herd of exploding radioactive largos, and the early jetpack upgrade is far more practical for general world traversal. The teleporters might have been useful, but the sheer amount of resource gathering involved in crafting them means you'll have rinsed all the environments before they become useful.

Slime Rancher’s hands-on approach and lively livestock could have made this the cream of the farming crop. As it is, this is a great idea that currently feels a little too cooped up.

A slight and repetitive but cute farming game, Slime Rancher doesn't quite reach the heights of its sub-genre.