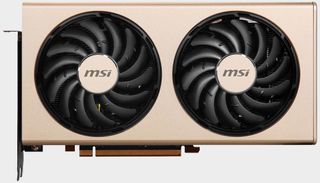 Stop going mad fiddling with settings just to get your games to run on an old graphics. Treat yourself to a GPU upgrade this holiday season instead. Need ideas? One option is MSI's Radeon RX 5700 XT Evoke OC. After factoring in the available discounts, you can bring this card home from Newegg for $369.99 right now.

That's $50 below the card's list price. Part of the savings comes by way of a $30 mail-in-rebate. Sure, those can be a bit of a hassle, but it makes this an enticing deal. The other part of the bargain involves entering coupon code 93XPE4 at checkout, to knock $20 off the price.

Those discounts combined make this one the least expensive Radeon RX 5700 XT cards on the market at the moment. It's a good deal because you're getting a custom model with a factory overclock—MSI set the base clock at 1,670MHz and the boost clock at 1,925MHz, up from 1,605MHz and 1,905MHz, respectively.

Granted, we're not talking about a crazy high overclock here. But hey, it basically amounts to a free performance boost, with MSI taking all the risk. And overclocked settings aside, the Radeon RX 5700 XT is around 5-10 percent faster than Nvidia's GeForce RTX 2060 Super, making it one of the best graphics cards for the money.

This card also comes with a couple of bonuses. Namely, it qualifies for three free months of Xbox Game Pass for PC, and your choice of of Borderlands 3 or Tom Clancy's Ghost Recon Breakpoint, as part of AMD's "Raise the Game" bundle. So, there's some added value here.

If you don't like the design of this card, MSI's Radeon RX 5700 XT Mech OC model is on sale for the same price, also by way of a $30 mail-in-rebate and a $20 coupon code (VGASAV43Z). It sports the same clockspeeds and comes with the same bundled extras, just with a different custom cooler design.