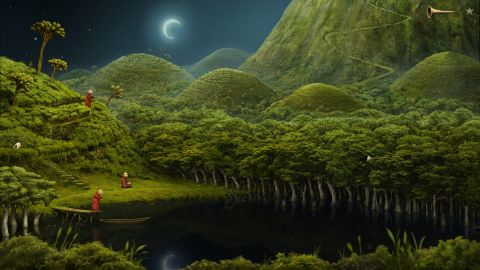 A warm and joyful adventure through a magical world; obtuse at times, but more interested in delighting than challenging.

I'm standing in front of a giant moth. It would tower over me if it weren't unconscious, but it is, and so I tweak one of its antennae, just to see what will happen. It quivers, like a guitar string. I twang another, and then another. Eventually, they start to resonate, deeply and musically. As the vibrations fade away, I put my magic horn to my lips and play back the tune. My brief concerto awakens the moth, and boy, it is lit. A pair of luminous, spectral ‘ghost moths,’ one pink and one blue, emerge from its proboscis, entwined in a musical dance. With patience and a notepad, I'm able to replicate their musical interchange as well, and that's when things get really weird: Lights flash, music plays, and what I can only describe as a carousel of patio lanterns begins to spin under the lip of a giant fungus. I dance a triumphant jig; a blue-pink swirly thing is added to my inventory. I have accomplished... something. I have no idea what.

This is Samorost 3, the latest, and arguably greatest, game to come out of Czech indie studio Amanita Design, the home of cult-hit adventures Botanicula, Machinarium, and of course the first two Samorost games. At its core, it's a point-and-click adventure that follows a string of puzzles through a hazy, myth-like narrative. But like its predecessors, it's also very much a toy, something to be played with rather than completed, and it encourages exploration almost to the point of demanding it. An infestation of termites, for instance, can be made to sing an Ave Maria-esque choral. It's a simple thing to do, easy to stumble upon by accident, and really quite beautiful. It's also entirely unrelated to your progression—making it happen earns an achievement, and (as far as I can tell) nothing more—but central to the experience. The plot, such as it is, is paper-thin, but individual moments like that are magical.

They're also so surreal that when I did something right, it was sometimes impossible to tell exactly what I did, or why it was right. I crept up behind a glowing, golden gazelle, leapt upon its back, and went for a wild ride along the side of a mountain. After it bucked me, we both went back to our business as though it had never happened, and all I had to show for my efforts was another achievement. In fact, most of the game's achievements appear to be for completing superfluous tasks, like riding the gazelle, playing fungus music, or even being nice to the dog you worked so hard to rescue in the previous game. And it was a welcome change of pace: Earning rewards for actually discovering things, rather than simply making my way through the game, felt like a proper accomplishment, and not just an inevitability. More to the point, it made me want to dig for more—to see what other secrets were hidden beneath the surface.

It’s easy to get lost in it all, which can be a downside. There's no text, and the in-game languages are pure babble, so ‘direction’ is limited to the pictographic speech bubbles that pop up now and then. The inner world of a decomposing tree, filled with chambers and tunnels and bugs and levers and even a hamster wheel, left me feeling almost immediately overwhelmed and halted my progress until I took a break, came back, and noticed something that probably would've been immediately evident if I hadn't been so put off at first sight. After that, I was through it in just a few minutes.

Samorost 3 is not a very difficult game, despite the way it sometimes looks, but it does require a certain amount of patience, observation, and willingness to roll with the weirdness. There is guidance to be had in the form of a built-in hint book that will direct you, with pictures and the occasional pointing arrow, toward your next goal. I didn't find it necessary, and bulling toward the end really misses the point of a game like this (if I can say so without sounding overly judgmental) but I was happy to see it included because it fits well with Samorost's non-threatening nature: relax, poke around, discover things, and if you want help, it's there.

Something I did find slightly frustrating, on two occasions, was the need to repeat actions without being given any indication that repetition was required. In one such instance, a couple of yanks on a piece of wood produced no visible effect, and so I moved on, thinking I was on the wrong track. But I was not—I eventually came back and tried it again, because there was nothing else to do, and after a few more swings of the mouse, things started to happen.

It's obviously a very minor point as complaints go, and not nearly enough to detract from the brilliance of the game. And Samorost 3 is brilliant at times: Weird, wonderful, and a worthy next step in the evolution of Amanita Design. Given the studio's history, that's no small accomplishment.

Where it all begins.

Despite their demonic appearances, these guys know how to have a good time.

In the belly of the beast, figuratively and literally. This one took me awhile.

Pretty sure this is a tea infuser with legs. Never did figure out what to do with it.

A warm and joyful adventure through a magical world; obtuse at times, but more interested in delighting than challenging.