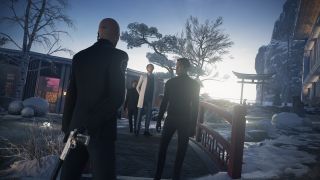 This diary was originally serialised in PC Gamer magazine. For more quality articles about all things PC gaming, you can subscribe now in the UK and the US. You can read part one here, and part two here.

1. Weapons chosen via a lotto spinner.
2. One weapon per target.
3. No reloads except upon death.

No time to beat around the bush. Agent 47 has his work cut out for him. We’re assassinating targets in Hitman using a lotto spinner to choose our weapons. This time, we start at an unsanctioned militia training ground in rural Colorado, where there are a whopping four targets waiting for their unlucky numbers to come up. This includes militia leader Sean Rose and his three lieutenants: Ezra Berg, Penelope Graves, and Maya Parvati.

Agent 47 infiltrates the area through the undergrowth just outside the perimeter fence. I spin the wheel and out rolls an eclectic arsenal. Ezra Berg gets number 20—fiber wire. Graves gets 3—a shotgun. Parvati gets 2—a silenced pistol. And Sean Rose get 8—an axe.

As well as being the least glamorous of 47’s many murder-holidays, Colorado is also a hostile area from the start. I slip through the perimeter fence and find myself a basic militia disguise, hiding the knocked-out guard in a conveniently placed dumpster.

Able to wander freely, I plan my approach. I decide that I’ll tackle Graves last, since a shotgun blast will stir the hive like a bear pawing for honey. Parvati will also have to be handled later, as she hangs around quite a public area.

Hence, it’s either Berg or Rose first. I settle on Rose, as I know how to get rid of him fairly easily, via one of my favourite mission stories in the entire game. Rose, you see, suffers from OCD, and you can isolate him from his security by triggering it. It’s a particularly evil and insidious method, but also satisfying in its subtlety.

First though, I need to find an axe. Colorado is a messy level, so I use the online Hitman interactive map to pin down the axe’s location. It’s embedded in a tree-stump in the far corner of the map. I pick it up with little difficulty, and on the way find a shotgun. You practically can’t take a step without falling over a gun in Colorado (just like real life!). I already started with a silenced pistol and fiber wire, so I’m now almost completely tooled up for the mission. But I need one more item. Returning to the main house where Rose normally hangs around, I pick up a special hallucinogenic drug—used by Ezra Berg in his twisted interrogations—which I need to eliminate Rose.

I skulk around the back of the house, using the drug to spike the cigarettes Rose habitually smokes. I then try to get into the main house, but the guards are Rose’s personal retinue, and won’t let in the regular cannon- fodder. I sneak around the security checkpoint to the side of the house, where one of Rose’s men hangs around near a crate perfect for hiding bodies inside.

I knock him out and steal his clothes, but I’m caught in the act by another nearby guard. I pull out my silenced pistol and empty a clip into him before he can raise the alarm. A stupid slip up, and I also have to kill the unconscious guard as he apparently counts as a witness. Still, it could have gone a lot worse. I steal a uniform and hide both bodies in the container.

Heading into the house, I tamper with the clock and misalign the pencils on Sean Rose’s desk, then exit to the rear and await his arrival. A few minutes later he approaches, disturbed by his skewed stationary. The spiked cigarettes further elevate his panic (this really is a nasty way to kill someone) and he rushes into the toolshed to calm down. I help release some of the tension by slicing open his throat with the axe.

Tip of the iced berg

One down, three to go. I dump the body and head outside, running almost immediately into the masked face of Ezra Berg. I follow him around the house toward the outdoor entrance of the basement. I realise that, in doing so, we’re crossing through the area I cleared of guards earlier. Acting on impulse, I pull out the fiber wire and strangle Berg right there in the open.

It’s a huge gamble, but nobody notices. However I’d forgotten that I disposed of two guards in the nearby body container, filling it up. Consequently, I’m dragging around one of Rose’s dead lieutenants in an area swarming with guards with nowhere to put the body.

Eventually I realise there’s another body container just behind the main doors of the house. But between me and it is a security camera. Leaving the body on the patio, I head inside the house, disable the security system, and then head back outside. I drag the body right past the main security checkpoint, into the house where there are at least a dozen guards, and somehow dump it in the container without anybody noticing.

Berg down. Parvati next. The former Tamil Tiger captain is heading some sort of spec-ops training regime, making her difficult to isolate. However, as I shadow her patrol, I notice she briefly diverts from her training to have a discussion with a mechanic near a couple of large garages. I figure if I need to kill her with a straight shot, this is definitiely the best place.

At first I consider shooting her from inside the garage, through an open window. But there’s a guard patrol that runs right behind me. So I instead stand between the two garages and take the shot at a diagonal angle, instantly moving away from the scene once the shot is taken. It works, my identity isn’t compromised and the kill sticks.

Now for the big one. Graves’ patrol takes her through most of the compound, flanked at all times by two security guards. The only time she isn’t escorted is when she’s inside the main house. After watching her make her rounds, I notice there’s a brief moment where she stops to examine the grandfather clock I tampered with to kill Rose. Adjacent to this is a door leading to the militia’s server room. In theory I can stand in there and shoot her. Everyone will hear the shot, but nobody will see it. Er, in theory.

I let Graves take one last tour of the grounds. When she returns to look at the clock again, I take the shot. Blam. I rush to the end of the room and hide behind a stack of crates moments before a swarm of militia pile into the room. My status reads “hunted” which means if they see me, they’ll shoot on sight, and at one point a guard stands so close I’m sure it’s game over. Somehow though, they don’t notice me, and I’m able to complete the mission without any further noisy incidents.

Hokkaido, Japan. The last and trickiest of the original Hitman levels. My targets are ICA defector Erich Soders and Yuki Yamazaki, a former lawyer to the Yakuza. Soders is undergoing a heart transplant at a high-tech and even higher security clinic in the Hokkaido mountains. It’s so tightly controlled that I can’t smuggle anything into the building, which means no sniper rifle, fiber wire, or silenced pistol can be used for this mission.

Nonetheless, I spin the wheel. The numbers that come up are 6 for Soders, which is a sword, and 19 for Yamazaki—“other environmental”.

I decide to focus on Yamazaki first, as she is considerably easier to access. Even so, the clinic is monitored by an AI security system with computer-controlled checkpoints, so I need to find a uniform that’ll give me better clearance. After spending some time getting my bearings, I find a security guard watching over the toilets beneath the restaurant area. And after giving him a coin to chase, he quickly provides me with a disguise.

Able to move more freely, I start looking for a way to eliminate Yamazaki. After considering several options, I wander into the kitchens and stumble upon an un-filleted fugu fish. My decision is made there and then. I gut the fish to get the poison, then knock out the two chefs so I can easily steal their disguise.

I head upstairs to the sushi bar and prepare extra- special, extra-deadly nigiri. It isn’t long before Yamazaki ventures into the bar to sample the dish. She collapses a few moments later, dead as the fugu that killed her.

It’s as well Yamazaki proves an easy kill, because it quickly becomes apparent that killing Soders with a sword is going to be a nightmare. First I need to acquire a sword, which tend not to be that common in a clinic. It turns out there’s a ceremonial katana inside Yamazaki’s suite. But to get to it I need a black security uniform with level 2 clearance, and none of the nearby guards are viable targets. In the end, I have to go all the way around the clinic, sneaking into the high security area just to get the uniform I need to get the sword.

With this done, I now need access to Soders himself. But he’s in the operating theatre undergoing some pre-surgery stem-cell treatment. Only surgeons have access to the theatre, so I need to scrub up. In the end, I home in on the chief surgeon, who keeps venturing outside to chat to a helicopter pilot. While he’s out there, I deal with two nearby security guards using the old, ‘coin-toss and hammer to the face’ trick, before nullifying the chief surgeon in the same way.

I drag the surgeon into the basement and don his scrubs. I can now access the surgery hall and kill Erich Soders. Unfortunately my problems are far from over. First of all, it turns out surgeons carrying katanas don’t go unnoticed in a high security hospital. Secondly, the operating theatre is overlooked by a control room and two viewing galleries, one of which is filled with doctors watching the operation.

Oh, and there’s also another surgeon inside the theatre itself. It would be easier to walk into an actual theatre and kill the lead actor on stage, because at least the audience might think it was part of the act.

There’s no way for me to this do subtly, so I’ll have to settle for doing it quickly. I walk through the (mercifully empty) corridor into the surgery prep room, then pass through the door into the hall itself. Immediately the suspicion of everyone nearby starts rising. I walk up to the table, katana in hand and... It turns out the game won’t let you kill Erich Soders with a melee weapon.

Because of Soders’ unusual situation, alongside the fact that he’s so closely monitored, Hitman assumes that you won’t be stupid enough to attempt to kill Erich Soders with a large sword. I don’t get a cue to kill him by hand or even throw the weapon at him. All I get is Agent 47 staring blankly at the operating as the whole hospital explodes into chaos.

The alarm goes off, guards boil into the theatre from all sides. They demand that the mysterious assailant surrenders. I look around... and raise my sword.