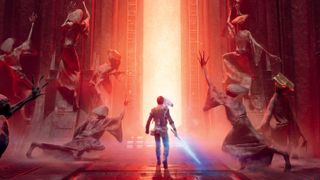 Jedi: Fallen Order was "a fun, straightforward holiday adventure," according to our review, and apparently sold pretty well. Unsurprisingly, Respawn likely isn't done with the wars among the stars. EA still has several years left on its licensing deal with Disney, and recent job postings suggest another Star Wars "action/adventure" game is on the way from the Titanfall and Apex Legends developer.

As our friends at GamesRadar noticed, Respawn is currently looking for a Senior Character Artist, Level Designer, and Senior Software Engineer, all to work on the "Star Wars Team."

The engineer listing states explicitly that EA is looking for a programmer to "create an incredible Star Wars experience" and who is "invigorated" by coding "third person action/adventure games."

We can't say for sure if the next Respawn Star Wars game will be a direct sequel to Jedi: Fallen Order, but it seems very likely. There's also the possibility that Fallen Order DLC is in the works, but none has been announced.

Even though I haven't seen it, I'd much rather a game based on The Mandalorian, simply to see behind-the-scenes footage of Werner Herzog in a performance capture suit, and to then read an interview in which he compares the experience to being imprisoned in a panopticon, or something like that.

In other Star Wars news, we recently ran a fascinating dive into the making of TIE Fighter. (I also hear there's a movie out this week.)