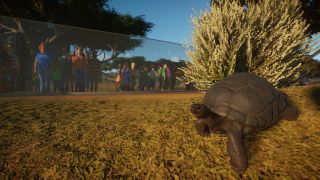 I have sad turtles. Planet Zoo's beta is underway, and for the last couple of days the welfare of these glum walking shells has been my responsibility. I'm not ready to be a parent, as evidenced by the legion of furious protestors demanding that I do something to cheer my gloomy friends up.

Obi and Kamaria the Aldabra giant tortoises were the first animals I added to my brand new zoo. The first problem they had with their habitat was literally everything. It had the wrong grass, too much grass, not enough sand, not enough water, no shelter—I was underprepared. I fixed it up sharpish, though, adding a pond and a cave and all the right flora straight from their native habitat. That should keep them happy, I thought.

The massive shelter was too small. The pond became fetid. There were too many people watching them. The turtles moved to opposite ends of the enclosure very, very slowly and sulked, alone.

I thought the turtles would be easy, but how can I be mad at them when they look so damn cute? So I rebuilt their shelter (twice!), changed the shape of the enclosure, researched new items and fine-tuned my employees' routines. All the while, the protestors were chasing away my other guests, so my cash was evaporating.

My warthogs weren't nearly as fussy. I bought two of them and got their enclosure right the first time, having already unlocked some enclosure enrichment items through research. I was able to pretty much leave them to it, entertaining guests by rolling in the mud and pooping. Unfortunately, I was so busy with the turtles that I forgot to teach them about safe sex. The warthog population exploded.

Determined to turn it around, I put all my warthogs on contraception and released the older ones into the wild. The conservationist points helped me clean the blood off my hands. Things seemed to be calming down and the zoo was finally running smoothly. I was flush with cash, the protestors were all gone and—aside from the occasional badly behaved lemur—the zoo had never been in better shape. It was right about then that the piglet got shot.

Look—nobody wants to shoot an adorable piglet, even with a tranquiliser gun, but it escaped and could have easily eaten a very small child. Not my finest moment, I'll give you. I think it somehow managed to sneak out the door when the keeper entered the enclosure, but I raised the wall a bit just to be sure. I don't know a lot about warthogs—who's to say a piglet can't jump two meters over a brick wall?

All that really matters is that I cheered those damn turtles up. My vets had been studying them intently, learning all sorts of details about them and unlocking new items that could be used to bribe them. No longer depressed, they started spending time together, discovered they had a lot in common and started an extremely cute family. So cute, in fact, that I was completely cool with them ruining my painstakingly balanced enclosure.

You know who I never had any problems with? Bears. They scratched themselves, lazed around the pool and snoozed—that's it. Bears have got it figured out.

They were meant to be my big ticket item to get the donations rolling in before I could afford something really prestigious, like a lion or a labradoodle. Unfortunately, I built their lavish enclosure a bit too far off the beaten track, leaving many of my guests unaware that a life-affirming experience was just down the path.

None of these little mistakes or disasters has been enough to tank my zoo, which continues to draw in the crowds with a long list of glum critters, but they've been enough to keep me very busy over the last couple of evenings. Planet Zoo's menagerie is lifelike and charismatic enough that I could happily spend hours just watching my enclosures, but it's reassuring to see that the simulation also conjures up plenty of management challenges.