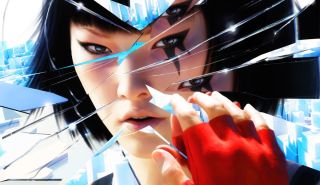 This diary was originally serialised in PC Gamer magazine. For more quality articles about all things PC gaming, you can subscribe now in the UK and the US. You can read part one here, and part three here.

There’s a decommissioned nuclear bunker just outside York where the walls are painted in calming tones—designed to help its occupants keep their heads as they carried out essential logistics in the days and weeks after a hypothetical strike.

It seems like wishful thinking to hope that a nice shade of paint might make the difference against the weight of the world’s end. Then again, colour associations are strong and laden with meaning. When I think of Mirror’s Edge, I tend to remember the gleaming whites and deep blues—the aspects of its palette I associate with serenity and freedom under an open sky. Now that I’m playing through it again as a killer, I’m noticing a whole other part of the colour wheel—the angry oranges and block reds that kick in with greater frequency as I punch my way through to the middle of the campaign.

As Faith, I’m a runner who lives in the gaps left by The City’s surveillance society, making highways of its roofspaces and maintenance shafts. But the cop gauntlet of our last instalment made it clear that something has changed—power in The City is shifting, and Faith’s outsider status is in flux.

In fact, right now I’m about as inside as it’s possible to be, in the offices of Robert Pope & Associates. Pope is a mayoral candidate running on an anti-surveillance platform, which might be why his building is full of frosted glass windows, as opposed to the transparent panes found everywhere else. I’m on the 26th floor, Marketing. The carpets are thin and the walls are adorned with TVs, in places nobody would stop to watch them.

Fighting with my family

I’m here because police chatter suggests Faith’s sister Kate—a cop—has been involved in a violent incident. Sure enough, we find her in Pope’s corner office. The would-be mayor sits at his desk overlooking the whole city, but he’s not enjoying the view. Blood pours from his head, and Kate stands over him. Apparently this sort of thing runs in the family. Kate says she’s been set up, and a piece of paper on Pope’s desk points to an “Icarus”, but there’s nothing to be done about it right now. Sis is going to jail, and I need to get out of here. As I make my way out, SWAT boots fl atten the carpet thinner still. “You are surrounded,” a voice bellows. “Do not attempt to exit the building.” My new philosophy dictates a third way, however: before I leave, I have to try and fight them.

A dozen militarised policemen have the entire floor covered with assault rifl es. If I’m going to stand a chance of beating them, I have to get at their weapons. Thankfully, the infl uence of The Matrix lies heavy over Mirror’s Edge, like an oversized trench coat. Running generates ‘reaction time’—and when I press X, I can cash it in for a few seconds of slo-mo. That’ll make it far easier to exploit the tiny window of opportunity I get to grab a gun at close range before it makes contact with my face.

After several attempts, I perfect the combo—sliding beneath the bullets of the nearest cop, straightening up to receive a rifl e butt to the chin, then wrenching the weapon away at the last possible moment. I turn the gun triumphantly on its owners, and—click. Click, click, click. Nothing happens. Other people’s bullets fill the air. My slo-mo is spent, I can’t arm myself, and there’s absolutely no way I can confiscate 11 more rifl es in a row. It’s time to turn to my third rule and run. Luckily this is an office built to impress—lots of light, and lots of openings. I slip through an indoor window into Accounting, and take the mezzanine floor up to the vents. The cops fill those with light, too, opening new holes in the metal beneath my feet. It’s a hurried retreat—my escape is accompanied by a soundtrack of dinging lifts, the thud of doors barged open, and once I make it to the building’s exterior, the wop- wop-wop of a helicopter’s propeller.

After an eternity of fire escape chicanery, I drop down into an enclosed urban garden. In the stark colour scheme, even the plants are painted an artificial white, like a reverse Alice in Wonderland. I take the nearest door into the City Eye news station, and spot three SWAT cops standing at the far end of a corridor. I can’t use their rifl es, but I do prefer these odds. The chopper’s guns can’t hit me here, and nobody else is following. The corridor glistens with red paint. I veer right, pushing Faith’s light frame over a chain link fence into the parallel maintenance area. Here I can close the gap between me and the cops without eating all their bullets.

I slide-kick the cop at the rear, transferring all my momentum into his legs and taking his weapon when he doubles over. The chamber’s empty, so I turn tail and zigzag back down the corridor, pinging between the walls to keep safe. Even playing the game in this counter- intuitive fashion, speed is my armour.

With each small success comes a dose of panic. I’m far from mastery, and with that first downed cop comes the mounting pressure to pull it off again, and again, until the encounter’s over. So it happens that I don’t kick the second cop in the head as intended, but push the wrong buttons and spin around in mid-air, falling flat on my arse.

While the scene reloads, I start looking up YouTube videos with names like “Mirror’s Edge All Disarms”. I feel like Neo, uploading martial arts directly into my brain. Suddenly, I know how to expose an enemy’s back by chaining a wall-run into a kick, granting me a moment free from gunfire to disarm them. To make it happen, though, I have to unlearn Titanfall 2.

In Respawn’s game you can push leisurely off a wall like a swimmer, redirecting yourself as needed. But in Mirror’s Edge you ricochet like a bullet. Your point of entrance determines your angle of exit, and that kick has to happen near-instantly if it’s going to connect.

Once I get it right, the second cop falls this way. The third I meet unexpectedly in a doorway as we both hurtle around the corner in opposite directions. Startled, I smack him so hard he ragdolls into the wall opposite. His jelly-limbs wobble gently under his shoulderpads. If it’s any consolation to him, I’m shaking too.

On comms, Merc is still troubled by Pope’s death, but in my journey he’s just one body among many. Following my handler’s directions, I stride out across the hideous yellow-and-bonsai-tree decor of the journalists’ office, where news of Pope’s murder already rings from every screen, and pick up speed as I head out to Centurion Plaza. Which doesn’t sound authoritarian at all.

“Blues ahead of you,” Merc warns. “One at a time, remember what I told you.” These are street cops, much less armoured than their SWAT equivalents, and the game wants me to take them out. I jog to meet the first, and he brings his pistol down towards my head. I duck out the way, hitting the prompt at the right time to use his own momentum against him, twisting an arm up behind his head. I’d read him his rights, but I’m not sure they have those here anymore.

This gun has bullets in it. I wave it around the plaza and power up the wide steps of the train station—a grand facade celebrating this society with concrete brutalism and bright orange flags. This is my first opportunity to bring firepower to bear against the SWAT, however piddly. I take clumsy potshots at those I can see standing at a roadblock, and watch one fall before making my escape. For the first time since starting this playthrough I feel powerful, and at least somewhat in control.

Sniping in the sewers

My next assignment sends me down a gaping storm drain, which looks like the Sarlacc’s pit after a deep clean. I’m looking for an old runner acquaintance named Jacknife, who might know more about Icarus than we do, which isn’t hard.

Sure enough, a sniper team has set up ahead. Their sights bob gently on a green sea of gangways as I climb, promising serious hardware if I can only reach it. Eventually, by leaping between tall concrete pillars, I get close enough to disarm a marksman—but make the mistake of kicking him in the chest as I hop over a gap. He stumbles, and I plunge straight downward, making a soggy surface far soggier. Momentum really is life and death in Mirror’s Edge.

On the second try, with the help of slo-mo and a rain-slick wall, I yank the weapon from his grip. It looks huge against the game’s empty HUD, a weighty presence in Faith’s hands. And so it proves. Once I’ve dispatched the snipers positioned on the opposite side of the drain, I make to jump to the next platform, but the rifl e won’t let me. With this albatross pulling me down, I can’t even mount the first springboard. I’ll have to leave it here. Exeunt through the emergency overfl ow gate, pursued by police.

I make my way up the drain to ground level, by pipe and by crane. It’s the only place the game’s platforming rhythm has matched the stuttering, fumbling one I’ve chosen for myself by embracing combat. So when I emerge on the surface and find a riot squad waiting for me, it feels like a natural part of the game’s fl ow.

Armed with shotguns and wearing shoulder pads that suggest their mums have dressed them for roller skating, the riot cops strike less terrifying figures than the SWAT. I can take them. But I’ll need to pick them off—and more importantly, pick the guns from their unconscious bodies.

Finally, something with a kick. There’s no Doom-style boom here—instead the shotgun comes over like a stapler produced by Skrillex. But it sends the riot guys flying backward, and it’s a relief to see somebody other than me getting some serious air for once.

Afterwards, though, lugging the gun around reduces Faith to a goofy plod. And my very next move requires a four part jump across parked lorries over a barbed wire fence. Then I realise: that’s no coincidence. Like the platform in the storm drain, this sequence is designed to disarm me, just as I’ve been disarming cops all over town.

At last, Mirror’s Edge is letting me at the big guns. But it’s still trying to control where and how I use its weapons, and it remains to be seen whether I can break free.