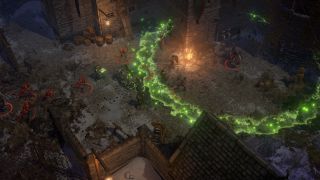 Owlcat Games are following up Pathfinder: Kingmaker with another adaptation of a tabletop RPG campaign, this time called Wrath of the Righteous. It's about a mythic hero who challenges demon lords, closes a portal to the Abyss, and leads a crusade. While Owlcat have enough money to make Wrath of the Righteous they've turned to Kickstarter to expand their budget and also drum up some interest. As their campaign page says:

"While we have enough budget to bring the concept of Wrath of the Righteous to life, we want this game to provide a truly epic experience. The game is built around the idea of a rise to power via one of six different Mythic Paths, each of which will transform the player’s character into a powerful being with special abilities. They will also significantly affect the story branches, change the world around the character, and impact the player’s relationships with companions and NPCs. This idea can be stretched a lot further than our current budget allows."

They set their initial goal at $300,000 and blew past it handily. At the time of writing they've raised over $780,000 and are revealing stretch goals. The next one, unlocked at $845,000, will add an extra race that players will get to vote on—one of either ratfolk, catfolk, or kitsune being added as an option. There are 31 days to go so expect plenty more to be revealed.

Wrath of the Righteous also promises to have an enhanced tutorial for newcomers to the Pathfinder rules and a 360-degree rotating camera.

Maybe one of those stretch goals still to be revealed will be an option for turn-based combat, but if not we'll just have to rely on modders again.