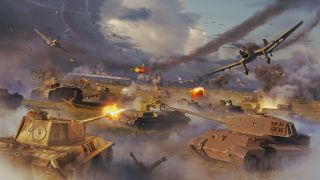 Sometimes all a game really needs is a good Undo button. Wargames can be complex things, full of edge-case rules and surprising mechanics—how do bridges work, again? Can this unit attack after moving? The complications are myriad. The power to take back an accidental click, avoid a misunderstood mechanic, or dodge a dodgy combat resolution is powerful. Euphoric, even.

Friends, I'm here today to say that Panzer Corps 2 has a really good undo button. I recently got to sit down with a preview build of the game, and I found the ability to take-backsies my way to victory not just useful, but thrilling. No amount of do-overs can make up for bad strategy, but mistakes get made—sometimes five moves ago—and the developers of Panzer Corps 2 understand that. This isn't a matter of letting me undo bad strategy, or making the game easier, it's a matter of respecting the player's time. Penalizing a player for honest mistakes in a turn-based game is bad design when scenarios are designed to take an hour or more. Panzer Corps 2 understands that.

The upcoming sequel to 2011's Panzer Corps—itself a re-imagining of classic wargame series Panzer General—continues a tradition of caring about small details. Say, for instance, the difference between a Panzer IIIF and a Panzer IV Ausf. D. In its core combat, and the way a battle plays out, it stays true to the spirit of those earlier wargames. Panzer Corps 2 doesn't focus as much on the precise mechanics of supply as prior entries, and that shows. The front isn't represented as much on the map, and an area has to be well and truly surrounded to count as encircled. Instead the focus is on maneuvering and capturing: pushing tanks past and around the enemy is vital, as is snagging new airfields to rebase your planes closer to the front. The scenarios I played were more wars of maneuver than of precise front lines.

The biggest change for the sequel are the graphics, a leap from pixels and sprites to Unreal-powered 3D graphics. It's a welcome upgrade, and the detail-oriented, realistic art style looked quite good in motion. The interface isn't quite as nice—blocky and obtrusive—though it's definitely better than 90% of wargame fare. It's an addition of pure appeal, but it truly does help bring the series into the 21st century. It ran quite smoothly for a preview, as well. These new graphics come complete with more detailed attack animations for every combatant, which are quite nice, but in another time-saving measure units can begin their action before previous combat and movement animations are finished. It also lets you hold down the spacebar to power through the AI turn by having the AI do the same thing.

Unlike many other operational-level World War 2 games, Panzer General 2 lets the player build their army from the ground up. You start with picking a leader and their specialties. Mine, for example, was able to field more tanks and had trained their armored divisions to overrun the enemy—but had a downside, and refused to field overstrength units. Regardless of specialty it's down to you to pick how many infantry divisions, or tanks, or planes you're going to field, and of what kind. The army units you choose stay with you from campaign to campaign, accruing veterancy, and you can upgrade their equipment as new tanks or transports become available.

Your army is limited by a total size, with units taking up varying amounts of slots—a single slot for a unit of Bridge Engineers, five or more for super-heavy railway artillery. You also generate a currency called Prestige as you take objectives and finish missions, and that prestige is spent not only to get new units while deploying, but to reinforce existing units or bring in new units mid-operation. I liked the way the prestige mechanics played out. Should I spend a premium for veteran reinforcements on a few key units, or dilute my whole army with green recruits?

The preview I played had me helm the invasions of Poland, Norway, and France. (In that order—a little odd, but okay, it's a preview of an unfinished game.) Carrying a personalized army from map to map was a great touch, and the units felt mine in a personal way that's rare in wargames at this scale. I had picked each unit out of a large lineup, used it through multiple battles, and chosen specific heroes to accompany it. By the end of the rather short campaign I had treasured veteran units, and my army makeup was remarkably different from the one a purely historical wargame would have provided. My most veteran infantry had worked to encircle Warsaw and storm Oslo, and I rewarded them with equipment upgrades and heroic leaders. Other games may have simpler mechanics, or at least more elegant ones, but Panzer Corps 2 is delivers the experience of being a General like little else.

With the full game promising a 60-mission branching campaign and playability for every major faction of World War 2, I can't help but feel like Panzer Corps 2 is going to be a strong contender for best strategy game of 2020. The final release remains to be seen, of course, and for many the game's most interesting feature is going to be cooperative multiplayer allowing simultaneous turn-taking. I'm highly intrigued myself, and that functionality wasn't in the preview build I played.