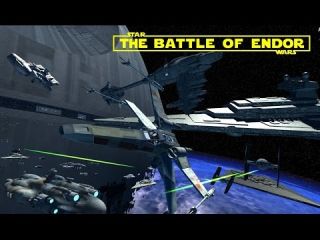 Have you ever found yourself with an Oculus Rift strapped to your face, and no real idea what to do with it next? Allow me to make a suggestion: Hop into the cockpit of an X-Wing starfighter and enjoy a front-row seat for the Battle of Endor.

The video is taken from an Oculus Rift X-Wing simulator being developed by James Clement, who wrote on YouTube that it "still needs a lot of polish" but made it available for download for those who want to try it anyway. Unfortunately, it hasn't been updated since September; the most recent related video, a demonstration of a technical issue with flickering shadows, went up at the end of September.

The video starts off fairly slowly, but the intensity jumps up dramatically when the order to engage the capital ships at point-blank range comes in. Twisting around the massive Mon Calamari cruiser and then strafing the Star Destroyer provides a scale and sense of speed that the opening minutes lack, although it loses momentum again once the fighter dives into the exhaust port: There's no sense of anything at all happening beyond a pleasant, traffic-free cruise through a four-lane tunnel.

This kind of first-person, in-cockpit experience is exactly what the Oculus Rift is surely made for, and somewhat surprisingly, it doesn't take a whole lot of hardware to make it happen: According to the Oculus page, the Battle of Endor sim was tested on a 2.4 GHz dual-core AMD CPU with 6GB RAM, and a laptop with an unspecified 2.4 GHz CPU and 16GB of RAM. It's clearly not as polished as, say, Elite: Dangerous, but it's free. And it's Star Wars! Get the details at Oculus.com.