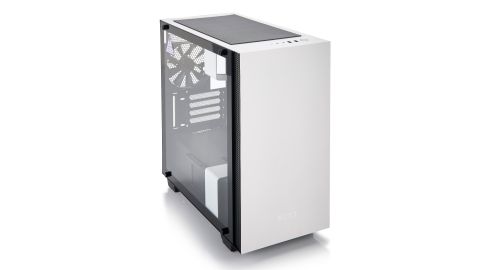 Exceptional design and brilliant use of materials mean this one of the best cases we’ve ever gotten our hands on.

Ah micro-ATX, the bastard child of the form factor family. Sitting somewhere between the juggernauts ITX and ATX, it takes the best of both worlds, and condenses it into a feat of efficiency and expandability. If you’re after a smaller rig, with support for multiple GPUs, more memory, and plenty of I/O, without going huge, it’s a happy compromise. Problem is, being the Goldilocks of the PC world isn’t good enough in today’s age of rapid releases.

In a world of bi-yearly processor launches, manufacturers simply don’t have the time to develop boards for this form factor anymore. It’s just not that important in the grand scheme of things. It lacks the mainstream desirability of ATX and the engineering “wow!” factor of ITX, so allocating resources to it doesn’t make much sense, as far as AIB partners are concerned. And that’s the problem: There’s not enough micro-ATX boards.

For a brand-new mid-range rig right now, if you’re after Ryzen and X370, you can forget it. There are no boards—plenty of B350 variants, but no premium. Turn to Coffee Lake and Z370, and you’ll find just three. Threadripper? There’s one on the way from ASRock, but it hasn’t been released just yet. And for X299, there’s a grand total of just one board. Slim pickings indeed.

Seemingly, then, NZXT’s H400i is a bit out of place in this world of ATX and ITX giants. It’s a case that sits right in the center of this middle-ground massacre, yet it really doesn’t deserve to, because it’s a fantastic piece of design. Not that that’ll surprise anyone, given just how impressive its father, the H700i, is. Those clever features that NZXT crafted around the brilliant structure of that mid-tower monster migrate well into the smaller form factor of this micro-ATX wonderdog. Whether that’s the intuitively folded cable bar, the smart SSD mounts, PSU cover, smart fan controller, tempered glass, and more, it all just works—and works well.

Yet there’s one difference: price. The H400i costs $50 less, and in a market where DDR and GPU prices are skyrocketing ever higher, that difference is very much welcome.

Where the H400i really shines, however, is with its cooling potential. Radiator and  fan mounting compatibility is exemplary. Whether it’s an AIO, custom loop, or air tower you have in mind, it’s a case that can very much do it all. No, seriously—two 140mm fans in the front, two in the roof, and a 120mm in the rear for standard airflow alone make it killer for any air-cooled system. Combine that with the fact that you can pack a 280mm radiator in the front and a 120mm in the back as well, and it soon starts to turn heads in the liquid-cooling world, too.

On top of that, you get that gargantuan front panel, perforated with holes along each and every side, acting as both a stylish design choice and a fantastic air intake for the two 140mms located up front.

Storage support, on the other hand, does come unstuck a little. Although you can install up to four 2.5-inch drives, there’s only support for a single 3.5-inch, so that’s something to take into account. Plus, of course, there’s no 5.25-inch bays—they’ve seemingly gone the way of the dodo at this point.

If nothing else, the H400i is a perfect excuse to migrate toward the micro-ATX form factor. Its exceptional design, brilliant use of materials, and nice price savings over the bigger H700i all combine to make it one of the best PC cases we’ve ever gotten our hands on.

Exceptional design and brilliant use of materials mean this one of the best cases we’ve ever gotten our hands on.