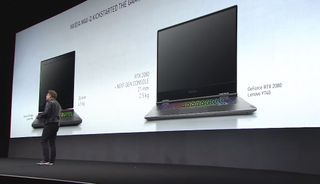 In about a year from now, Sony and Microsoft will release their next-generation game consoles, the PlayStation 5 and Xbox Series X, respectively. Both will sport custom AMD silicon, and if Nvidia's recent claims hold true, neither one will be faster than a current-generation gaming laptop with a GeForce RTX 2080 Max-Q GPU inside.

Nvidia made the bold claim during its GPU Technology Conference (GTC) in China last week. It appeared on a slide as Nvidia CEO Jensen Huang extolled the benefits of its Max-Q GPU stack, and how it's powering thinner and lighter gaming laptops, which he says is "now unquestionably the fastest growing new gaming platform." To wit, Huang revealed Nvidia this past year sold 5 million gaming laptops in China alone.

According to Huang, this is what led Nvidia to create the Max-Q line: to enable more nimble form gaming laptop form factors.

The fruits of that effort have led to notebooks like the Lenovo Legion Y740, MSI's GS75 Stealth, and Acer's Predator Triton 500, some of the best gaming laptops around, each one powered by a Max-Q GPU. Nvidia certainly deserves kudos in that regard.

Whether an RTX 2080 Max-Q laptop will truly be able to push more framerates than a next-game console, however, remains to be seen. It's a big claim, because generally speaking, Max-Q GPUs end up performing worse than their non-Max-Q counterparts. All other things being equal, a laptop equipped with an RTX 2080 Max-Q performs comparably to a laptop with a regular RTX 2070.

That's still fast, but we have yet to see what AMD's custom Navi silicon for the PS5 and Xbox Series X will deliver. All we really know at the moment is that it will feature hardware-based support for real-time ray tracing, as does Nvidia's entire RTX product line. Jarred reckons the GPU in the PS5 will be about as fast as a regular RTX 2060, and if that's the case, Nvidia's slide will ring true. Come November 2020, we'll find out for sure.