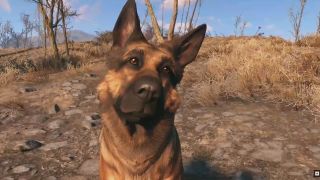 We already knew that the furry Fallout 4 follower Dogmeat cannot be killed. But did you know that the in-game canine is based on a real dog? According the story as it's told on Bethesda.net, Dogmeat's real-life alter-ego is a German Shepard named River who belongs to Lead Level Designer Joel Burgess and is a regular visitor to the studio.

The reason for Dogmeat's indestructibility, as Game Director Todd Howard explained in the latest E3 recap video, is simply that, in previous games, the death of the dog was a "reload scenario" for a lot of players. "[In Fallout 4] he can get really hurt, so he'll go down and be incapacitated during a fight, and you can run over and jam a stimpack in him, and then he'll get up," Howard said. "[But] no one plays the game, the dog dies, [and] they go, 'Fuck it, I'll just keep playing'."

There's truth to that, which is why I usually pick up the dog and then keep him around just long enough to get him someplace relatively safe. Humans I don't generally worry about so much—if you're dumb enough to follow me, then you're dumb enough to eat bullets on my behalf—but dogs deserve better. It's a position I feel is affirmed by the "Behind the scenes with Dogmeat" video below. It's not terribly informative, but he is a good boy (oh yes he is!) and he's not going to be turned into some wasteland scumbag's evening meal as long as I have anything to say about it.

Fallout 4 comes out on November 10.