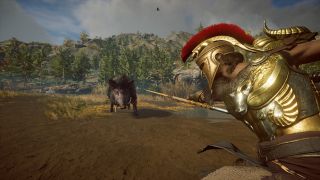 With its first DLC episode coming next week, Assassin's Creed Odyssey has received a major patch that adds a post-level 50 'Mastery' level to the game. This lets you spend ability points earned after that point on additional stat bonuses in a new menu screen, with each stat being linked to your three ability trees. It basically layers in more late game progression options, which I'm sure dedicated players will enjoy. Here's what that menu looks like:

You also have the ability to fast travel to mythical creatures in the game now, and the PC version specifically has a new option that lets you set Alexios and Kassandra's walking speed. The other tweaks are more granular:

- Added an option to dismantle items directly at Blacksmiths.
- Wearing the full set of a Legendary Armor now gives more powerful bonus than the version available for engraving.
- Addressed a display issue that caused Stats upgrades to appear downgraded after Level 50.
- The Child of Poseidon achievement/trophy will now unlock when conditions are met.

There's a whole host of other small fixes outlined on the Assassin's Creed subreddit. Assassin's Creed Odyssey's DLC is called Legacy of the First Blade, and the first episode arrives on December 4th, because the one thing this time sink of a game definitely needs right now is more content (I haven't quite found the time to finish Odyssey yet—each Assassin's usually takes me a few months of chipping away).