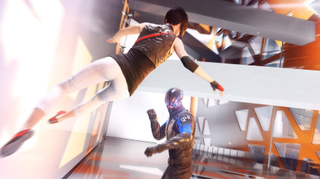 I've just watched the new Mirror's Edge: Catalyst gameplay trailer and despite its brief running time I'm already annoyed and exasperated. While the parkour and face-kicking and environments all look great, there's an element in the trailer that makes me completely dread playing it. It's one of my least favorite things in games: the guy who talks to you constantly via headset.

It's not the talking, specifically—it's that the things being said are completely unnecessary or redundant. Below, I've transcribed everything said (except a few words I couldn't make out) and determined if Headset Guy (he has a name in the trailer, but I refuse to use it) actually needs to say them. And as you'll see, he's not the only one in the trailer talking pointlessly.

The trailer begins with Faith in the city.

Headset Guy: "Faith. Got a run for you. A good one. Quick data grab, should be good scrip."
Faith: "Time to make myself useful, huh? Where do I go?"
Headset guy: "You need to make your way to the agricultural division at Elysium."

Verdict: Useful! Headset Guy starts out strong by giving necessary mission information. I'd suggest that if Faith has a headset, there's no reason she couldn't have a PDA of some sort, which she could look at for the same information: "New job: Steal data from agricultural division at Elysium." I only suggest that because pretty much everything Headset Guy says from here on will be essentially pointless noise.

Faith sees and hears a couple guards roughing someone up.

Faith: "What the hell? Just saw a couple of [guards] hassling a [dude]. What are they after?"
Headset Guy: "There's a lot of [bad guy] chatter about a runner they need to subdue. Avoid [them] and don't get into any scraps."

Verdict: Barely useful. We don't need to hear Faith say that guards were harassing someone: we just saw it. We can hear the guards telling the dude that's he's trespassing, so we know Faith, a runner, is breaking the law as well. This information is all conveyed cleanly by observing and eavesdropping, which is far more enjoyable than being told everything a moment after it happens. The only thing that might be useful here is the chatter about the runner—we don't know if it's Faith the guards talking about or someone else.

And as for "Don't get in any scraps?" Fuck you. I'm playing the game and if I want to get into scraps I will get into scraps. Maybe I want to kick those guards in the face and rescue that poor dude. A PDA would never tell me to avoid kicking people in the face.

Faith has been running and now stops.

Headset guy: "Elysium is one of the taller buildings. You should see their logo on the side."
Faith: "I see it."

Verdict: Redundant. Crazy thought, but maybe this line could be eliminated in favor of the tall building with the Elysium logo on the side which is plainly visible both before and after he says this? Meanwhile, Faith's "I see it" can be nixed due to the fact that she is seeing it.

Faith hears a weird noise, gasps, and spins around.

Verdict: Pointless. Most of them time in games when characters say something, it's for the player's benefit. Faith isn't really telling Headset Guy that she's here, she's telling the player that they are here at their goal. And she doesn't need to: she just slid down a wire right into the giant Elysium logo. And, Headset Guy doesn't need to tell her to be careful because the player will either be careful or will not be careful based on how careful they want to be.

Faith: "Fancy."
Headset Guy: "Elysium Labs. High profile data grab. They are very protective about this data. So there's no margin for error, you understand?"

Verdict: Irritatingly pointless. We know we're in Elysium, we know we're grabbing data, we know they want to protect the data or it would be sitting in a pile at the curb next to a sign saying FREE DATA. As for margin for error, that's a lie because I played Mirror's Edge and made a shitload of errors. I have no objections to the "fancy" comment—despite the fact that I can see it's fancy by looking at it with my eyeballs—but only because I like the word "fancy."

Second Headset Guy: "Heads up. I got plenty of motion below. An exec motorcade arriving, enforcers everywhere."
Headset Guy: "What? This is not looking right at all. We should abort the run."
Faith: "Let me roll with it, Headset Guy."
Headset Guy: "We do not mess with Gabriel Kruger."

Verdict: Sigh. We've received the terrible news that there is now a Second Headset Guy, and nothing he says is necessary either because they pull us away from Faith and show us the obviously evil and powerful businessman and his goons who we immediately recognize as our enemies. Original Headset guy suggests aborting the run, but unless it's an actual option—where Faith can leave and spend the rest of the night playing Alphabear at home—it's a pointless suggestion. And, we clearly do mess with Gabriel Kruger. That is clearly what we do.

Headset Guy: "Second Headset Guy, keep us updated on any changes outside."

Verdict: Shut up. Jesus, now we have one guy pointlessly telling another guy to pointlessly tell us something else. Don't worry, I'm sure he won't be bashful about updating us about the things happening as we see them happening.

We see someone else here, not a runner.

Faith: "Headset Guy, there's someone else here, not a runner."
Headset Guy: "I don't like this, Faith, You should get out of there."
Faith: "Sorry. I'm checking it out."
Headset Guy: "Of course you are."

Verdict: Barf. We know someone else is here because we see it, we know Headset Guy doesn't like it because why would he, we know Faith will check it out because she's a badass, or at the very least she is about to become one. None of this needs to be told to us. And, tip to writers: when people talk to each other they don't constantly say each other's names. Even over the phone. Stop that.

Faith: "There's a whole different set of labs here. This isn't agricultural research. What are they up to?"
Headset Guy: "Faith, you don't have to do this."
Faith: "I'm finishing this, Headset Guy. I'll be fine."

Verdict: Unnecessary. We see brain scans and surgical tables that indicate Elysium is doing things besides growing daisies and there's an eerie musical sting to help us determine something is amiss, so Faith's observation is probably unnecessary. Why not let these carefully crafted environments and sounds tell the story? As for the rest, we know Faith is bold—we are making her do bold things by playing—and we know Headset Guy's sole personality trait is that he's worried about her. This doesn't need to be reinforced every thirty seconds.

Faith sees the other intruder, some goons, and the evil Kruger, and things happen.

Kruger: "Activate the alarm. Deal with him."
Kruger: "Wait! I need him alive."
Kruger: "Stop her!"

Verdict: Great! The things Kruger says are great! People talking is great! It would be weird if people didn't talk. But Kruger, despite being evil, is saying useful things and conveying information to other people, unlike both Headset Guys who are just yammering away telling you things you already know and pointing out things you can see for yourself.

There is a bunch of fighting and Faith is trying to escape.

Headset Guy: "Faith, can you hear this? Don't try to take on everyone. Just get out, okay?"
Second Headset Guy: "Headset Guy, I can see them shooting at her!"

Verdict: I hate you both. Those very same things they're talking about—fighting everyone, trying to get out, being shot at—are actually happening while those two pointless idiots screech about them in my ear. Shut. Up.

Headset Guy: "Dammit! This was not supposed to happen. Get out of there!"

Verdict: Kruger? Is there an option in Mirror's Edge: Catalyst to work for Kruger? I like him. He's blunt. He's concise. He can talk into my headset any day.