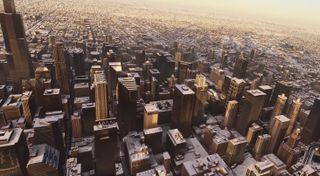 Microsoft Flight Simulator is shaping up to be a mindbogglingly ambitious flight sim, using massive amounts of data to create a strikingly realistic facsimile of the globe right down to individual trees and houses. And now it looks like that will include seasonal weather, too, which has been teased for the first time in a new video, above.

Last year, Asobo and Microsoft were considering seasons, but it was more complicated than just adding some snow. The change in temperature would mean rivers would have to freeze and animals would hibernate or move to a different climate. Absolutely none of that has anything to do with flying, of course, but it's all stuff the team was thinking about to make their version of Earth work the way you'd expect.

How far they've taken it remains to be seen. The video has been left to stand alone and doesn't mention the other seasons or what impact it will have on the world or flights. It looks like the weather will be dynamic, and we can see New York getting gradually covered in snow over time.

Nvidia also posted a video with lots of footage close to the ground, giving us a great look at the game's detailed cities. The first couple of clips in particular might as well be real footage from a flight, especially with Twitter's terrible compression. Even completely clear, however, Microsoft Flight Sim looks so realistic it might as well be magic.

Pilots have already been able to test the game in a technical alpha, and more of them will be hosted this year if you're still waiting for your shot in the cockpit. You'll need to join the Insider Program first, however, and then sign up for the alpha.