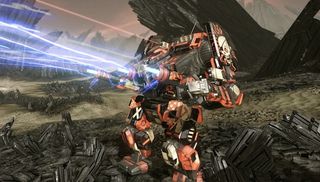 In case the thought of purchasing a game before its release wasn't thrilling enough, MechWarrior Online has now gone and given you the opportunity to tell your friends that you're participating in "Project Phoenix." It may sound like an initiative to raise you from the dead upon your departure from this world, but really, it's a fairly standard MMO pre-order program.

Project Phoenix was unveiled on the official MWO site today, listing four tiers for mech enthusiasts—rewards include various additions of "ancient technology" to your game, in the form of classic battlemechs like Locust and Thunderbolt. The stats of Locust have been revealed, with the other three to come over the following three days.

So what's the deal, anyway? The $20 tier will net you one classic battlemech, while the most expensive $80 tier includes all four mechs and 90 days of Premium membership. Or you could, you know, not pay anything, because this is a free-to-play game and all. But if you've been enjoying the fun in open beta and intend to keep playing upon MWO's looming official release, Project Phoenix could add to your adventures in the competitive world of laser-shooty robots. And keep note: if you pre-order before July 25, you get an additional 30 days of Premium time, too.