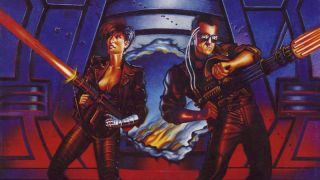 They asked me to write about cyberpunk and discuss some of the little fellows operating in that arena, presumably due to my effete, soft-bellied physiology which hints at a motherly instinct for the deprived. As purge week rolls out, we turn our eye to the people using free range organic human blood in their products, giving you that fair and balanced reporting you crave during Oscar season.

Bonafides: I’m a poor, the official cyberpunk caste. I modify my body as much as the next gal, maybe an Overton window or two more. I made some cyberpunk games including the sequel to System Shock. My healthcare is 432Hz—The DEEPEST Healing | Let Go Of All Negative Energy—Healing Meditation Music 432Hz and Trauma Recovery Theta Waves Meditation Music With Binaural Beats Healing Frequency | Good Vibes.

Roguelikes are perfect for cyberpunk because they’re balanced by the player’s greed. Invisible Inc and 868-Hack are prime examples, where more loot exists than you can possibly fit in your cute little mouth! Entire levels of cookie jars, and you can upgrade your stomach and your wrist size and also put the cookie jar in a choke hold.

Invisible Inc is tightly designed, but its levels feel mysterious, sprawling, thematic, truly panicky when you stay too long and cameras and drones are waking up everywhere, heroic when you use every last action point to barely scrape your way to the exit, whereas 868-Hack is pure microscopic primordial competition, each stage compacted to a single screen, every cookie jar engraved with exactly which cookie is inside them and exactly how many snakes will spring forth if you break it. The player can’t make any excuses.

Dystopia is this Half-Life 2 total conversion mod on Steam that probably doesn’t have as many people playing it as it deserves, but it was such a robust approach to team-based shooters! Instead of picking a character, you build your own from a combination of body shapes, weapons, and implants.

My favourite combination was leg boosters + katana + cortex bomb (the cortex being the most cyberpunk part of the brain) to parkour through the level and suicide into a helpless nerd staring at their console, and when someone kills you, hop around frantically and explode all over their delicate defences. It was such a hilariously chaotic way of playing.

And that nerd staring at the console? There’s a parallel Tron world where your avatars sling energy balls at each other and fight for control of nodes that let you open doors, activate turrets, etc, back in the real world. So instead of protecting a payload you’re protecting a specific human player doing their best Zero Cool impression. I like that winning requires mastery over both worlds. The freedom Dystopia allows the player remains ambitious and rarely matched.

Games are systems of optimisation, much like jobs, where you’re just trying to fine-tune the day to day peccadilloes of your drone-cage and the actual story (enslaving and burning the planet) is in the background. So they fit perfectly into this era of atomized, internalised corporate hegemony. Grind F2P, argue with another fleshbot on social media, busy work until you die, people are so fucked they instinctively look for games that therapeutically mimic safely having a stable job.

True kvlt cyberpunk = stealing and manipulating back an iota of the birthright stolen from you by the immortal biz-egregores squatting on the flayed surface of Gaia with their algorithm-driven AI-god infinite warehouse heat stroke hellplexes. Instead, people read cyberpunk as “cool fashion” because ultimately, people just want to look good and fuck. If you’re a liberal, you want to look good and be morally absolved and fuck. God forbid I get in the way of that. They’ll fuck a hole right through you!

I made a lot of my cyberpunk games while hormonally modifying my body and it definitely gave a whole “I’m boiling alive” effect to the vibe. Vesp, Sticky Zeitgeist, Neon Haze, Miniskirt World Network: Business Slut Online, Sky in the Room, High-End Customizable Sauna Experience, Cyberqueen (I don’t think this is cyberpunk it just has the word cyber in it which is good enough). No one got hurt or exploited while making them except me, so they’re not real games, just SCP or vapourwave enemas or whatever.

One of my favourites is Vesp, a world built around a perpetual plague of insects: epi pens at every corner, pesticide perfume, and a woman who sympathises with insects to a criminal degree. Sticky Zeitgeist is global warming creepy pasta cyberpunk for losers set around the 100th iteration of the internet.

I played this old boardgame, Hacker, based on when Steve Jackson Games was raided by the Secret Service after making GURPS Cyberpunk, an RPG sourcebook that was apparently “a handbook for computer crime”.

In this “game on a board”, you hack through phones like they did in the old days and try to have the most servers or something. It’s pretty random and unfair (lose an hour’s worth of upgrades!) and I felt bad for even winning, but it has that historicity, which is all most games can ever aspire to.

Everyone at the table had a personal vial of pickle salt divvied from our larder. We were born with hormonal deficits, which we manually supply to stay alive. One of these medications is a diuretic which rapidly depletes sodium from our bodies, hence the salt licks. It’s a great birth defect for deer furries to get into. Society is so stratified that this harmless act is enough to make us untouchables, we look too much like cool anime mutants and angels and threaten the primacy of the old gods. Cyberpunked again dood.

Darn! We’re running out of time! One last reader question: How can we as a community move forward after the guy from that one cyberpunk game shaved the word GAY into a dog then shot it with a flare gun on stream*? Surely it doesn’t compromise all the human fuel typing lines of code to launch a living, immersive surrogate world at us, the loyal gamers? We, the gamers, surely deserve our nut? Our share of creation??

*Context! A beautiful English countryside on a gamer’s retreat, the King’s Wood, if you will, the earthy, hallowed ancestral memory of hunting blossoming like a hungry flower in the heart of any red-blooded visitor to Albion.