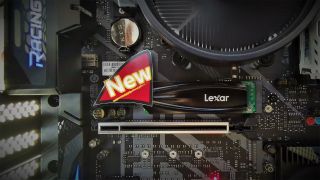 Lexar has not historically been a major force in the solid state drive market, but the company is hoping to make a splash next year with a high-end model that is more than three times faster than its current top-end SSD.

That position is currently occupied by Lexar's NM610 family. Available in 1TB, 500GB, and 250GB capacities, the NM610 is rated to deliver up to 2,100MB/s of sequential read performance and up to 1,600MB/s of sequential write performance. What you see above, however, is a prototype NVMe SSD that is much faster—it's apparently hit 7GB/s in internal tests.

The SSD Review was among a small group of press that Lexar invited to its headquarters in China to preview its upcoming products. Lexar is not sharing many details at the moment, though I'd bet my neighbor's dog it's based on a next-generation Phison controller (the dog yaps all the time so it's no big deal if I'm wrong, but I don't think I am).

I say this because Phison has been spearheading the ultra-fast SSD movement, made possible by AMD delivering the first consumer chipset (X570) to support PCI Express 4.0. Current flagship PCIe 4.0 SSDs top out at around 5GB/s (5,000MB/s) for sequential reads, and Phison said this past summer said that SSDs will hit 6.5GB/s in 2020.

Lexar is already there (or close to it), in prototype form. The drive it previewed to the press was demonstrated to hit 6,224MB/s in Crystal Diskmark. Sure, that's not quite 6.5GB/s, but Lexar also said it has already achieved 7GB/s in its testing. It's not clear what the testing conditions were, though (I've reached out to Lexar for more details and will update this article when/if I hear back).

The faster SSDs go, the more important cooling factors into the equation, at least as it pertains to maintaining these high levels of performance. That's why some of the fastest models come with chunky heatsinks.

Your platform plays a role, too. There is only limited support for PCIe 4.0 at the moment. You can install a PCIe 4.0 SSD into a motherboard that only supports PCIe 3.0, it just won't run hit its maximum rated speeds.

This doesn't really matter for gaming, at least not directly—the best SSD for gaming need not be a flagship drive, as even a SATA-based SSD that hits a ceiling at 580MB/s is plenty fast for most people. However, it's still nice to see companies like Lexar pushing the envelope. If nothing else, increasingly faster models can help push down pricing on slower variants.