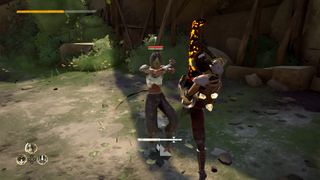 The slap has come to define Absolver. Technically called the Calbot, it's completely out of place in this game of fluid martial arts beatdowns and dances. Tyler called it "the most useless move in the game: a standing slap that's hard to land and does 15 damage (players have over a thousand HP). The first time I was slapped I was so thrown off I practically surrendered the fight."

Players love the slap precisely because it's out of place. Absolver is a game of masked mystic warriors in pursuit of excellence, so to see them resort to silent-movie slapstick is hilarious.

But it almost wasn't in there. The slap was thrown in as a gag during development, and fortunately the developers thought it was as funny as players do. "Initially it was just a joke from one of our animators," Sloclap's creative lead Pierre de Margerie explains, "which ended up staying in the game as an Easter egg! It did create some pretty funny situations."

Absolver's players have also embraced something else: codes of honor. In an online game without chat, where the only way to communicate is with a wheel of emotes, people are helping each other. Those who've finished its PvE mode and are marked by the cloaks they've earned seem particularly motivated to lend a hand. With them I've fought the NPC bosses called Marked Ones, and survived against overwhelming odds.

Players are also responding to Absolver's setting, with videos and Reddit posts where they try to explain its backstory (Pierre shoots down one of their theories, confirming that the mountain you teleport to Adal from is in the same dimension, and not in the past or future). He's been pleased to be sent fanfic written by a player too, though he does mention it was "only three paragraphs long," so maybe get on that, Absolver fans.

PC Gamer: I have to admit, I almost bounced right off Absolver. I restarted and managed to get into it this time, I started again as a Windfall character.

But the first time I played the absorbing class and I was terrible. But I did go back and I've managed to get better and started really enjoying it.

Nice! When did you pick it up again?

Cool. We did make a couple of changes, notably to how NPCs spawn and are spread in the different environments. We did see that when we released the game people got ganked by NPCs a bit too much and it made the experience pretty hard and not as fun as it can be, because although the game works well when you're one-versus-two—obviously you're locked on an opponent, the core is one-v-one—but it works well when you're one-versus-two. When you're one-versus-three and everybody beats you up in a second, well, you have ways of dealing with that but especially if you're a beginner it can be frustrating, because you get your ass kicked and feel like you can't do anything about it.

The balance is important though, you want to have those moments when you're outnumbered and need somebody's help because that encourages people to work together. I've had a lot of fun with people leading me to Marked Ones, to where cairns are, helping me fight three or four people at once.

Awesome. That's exactly what we're aiming for, which is that the encounters that you make in the world generate stories. It's true that if you weren't under pressure and challenged by the enemies you meet it would be less interesting to fight enemies. Myself I do that often, just stand there and watch, especially when I see it's a new player fighting NPCs, seeing if he or she handles themselves. And if I see that they're in difficulty then I jump in and come to the rescue.

It's always great to see someone with the cloak. It's a great visual touch, if they jump in to help you out you know, OK, I'm going to follow this person. They've got the cloak: they know what they're doing.

More things like that coming down the line! But the cloak, we wanted to have one strong visual indicator that if you had managed to reach the top of the Tower of Adal and become an Absolver then you could immediately show it to others.

The code of honor that's emerging, how much did you plan for that and how much has just been a bonus? Someone will feel bad about the fact they won by pushing someone off a ledge and then they jump off in the next round as a way of saying 'Sorry!' Is that kind of thing what you were hoping would happen?

We saw the beginnings of this during the beta. People were really respectful of each other, but we thought that it was probably because it was the beta. It was fans of the game and of the idea who had contacted us spontaneously and were in a way wanting to roleplay the Absolver experience. We thought the minute we release the game it's gonna be full of trolls and people beating you up all the time, etcetera.

Turns out that's not really the case. Especially in the beginning you had players who just beat everybody up that they encountered, but progressively it became more co-operative in the world and in combat trials. For instance, 90 percent of the games I do we bow to each other before we actually start fighting. That's something that happens spontaneously and I'm actually really happy about that because I don't see any other game out there where you've got taunts—you can taunt your opponent like 'come over here' or 'no, no, no' or that list of emotes—but what people use is the 'bow' emote. I really like that players have actually taken ownership of this martial arts, respectful, almost philosophical approach.

The only emotes I ever need are the bow, the thumbs up, and the apology. For when I screw up.

We've got more emotes coming also, down the line! But these few ones work well for sure.

What language do the characters in Absolver speak? Is it one of your own invention?

Characters speak Adalian, which remained the main language in most provinces, even after they became independant again after the fall of the Adal Empire: for example, both the Guides and Cargal and Kilnor, who come from the Tear, both speak Adalian.

What's next for Absolver?

We're an an indie team, a small team, so we can't tackle everything at the same time. We need to focus on the priorites. We wanted from the beginning with Absolver, where the core gameplay is PvP melee combat, to make a game that was also about learning, teaching, meeting other players and creating relationships with them. We've sold around 250,000 copies at this stage—players like this idea. We'll start focusing on the core PvP so the upcoming updates focus on that.

We will do more PvE later but in the upcoming weeks and months there will be more one-v-one and three-v-three game modes, spectator mode is planned, and in an update soon—in a few weeks—we plan on releasing a prestige system which will give special rewards and incentives, high-level rewards to players who play combat trials and other things over and over. Exclusive gear, badges, etcetera.

Also inventory salvage, because at the moment you accumulate a lot of elbow pads. That's coming.

I have a lot of pants.

You'll be able to salvage something out of them!

Good! Thanks for your time, Pierre.