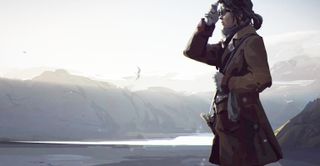 The Last Autumn is the latest expansion from 11 bit studio's apocalyptic winter survival game Frostpunk. Expect it to once again make you feel ridiculously guilty for the terrible choices you have to make. I'm sorry that I endorsed a child workforce, don't look at me like that!

In this expansion, 11 bit studios focus on a time before the dreaded winterscape enveloped the world and forced humans to create the precarious heated cities we see in the base game. The climate at present is a comfy 10 degrees, but the apocalyptic winter is coming.

The green new landscapes come with new game systems, but it pushes the same message as other 11 bit studios survival games: you can't have everything, you must make a choice.

The story of The Last Autumn focuses on building one of the first generators—the tower that becomes a beacon of hope and heat for many cities in the base game. It's a monumental task. Instead of keeping your city warm, your goal in this expansion is to build the generator over four stages of production.

Setting this expansion before the events of the base game gave 11 bit studios more room to explore Frostpunk's lore. "We've explored a lot of immediate survival stories in the four base scenarios and we felt like a change of pace was in order," Frostpunk project lead Jakub Stokalski says. "Frostpunk's lore resonated with a lot of people and it felt interesting to explore the events that led to the Fall. It's an interesting state of affairs, where on one hand—the old world order is still in place, but it's very much wobbling and some already know how it will end."

It's a peculiar feeling playing a scenario where you already know the melancholy outcome. It's an interesting peek into the state of the world before the winter apocalypse destroyed everything.

Your camp is an outstretched arm of the British Empire, which sends you regular shipments of resources. Your settlement is placed somewhere that looks like the end of the world. The strained metallic noises of the generator are absent and have been replaced with the crashing of waves and caw of seagulls. Building a dock near the water's edge will allow British ships to supply you with one resource of your choice; coal, wood, or steel. Britain will even send you more workers, engineers, and steam cores for when your production line increases.

Within the centre of the camp is a deep, circular pit where your generator will be erected. Every scrap of resource that doesn't go into buildings will all go to the construction of the generator, which needs a whopping fifty workers to build. It feels like you're pouring your resources into a hungry open mouth that eats everything up, including workers. Workers go in, but there's a possibility that they might never come out again. The expansion is very effective at making you feel each loss.

"The theme of sacrifice and survival was very much a narrative axis for us," Stokalski says. "But with The Last Autumn there is a twist: you're not building the generator for yourself. It's for other people, planned to evacuate here sometime in the future, whom you'll probably never meet. Will you still push your people to get it done, even though their sacrifice is for someone else entirely? It felt like an interesting approach to this classic conflict, one that fit with lore and setting well and we were eager to pursue it."

Each generator stage demands more from you, even though you've only just scraped over the finish line of the previous stage. When part of the generator was close to being finished I always wanted to push workers a little bit more. The Last Autumn conjures a feeling of desperation that sets Frostpunk apart from other survival games and city building sims.

The hope meter at the bottom of the screen has been replaced with a motivation meter, and the adaptation law book is replaced with administration. The law tree is similar to the base game with the exception of a few new unlockables like cocaine pills that keep your worker's motivation up. Yep, you can now poison your workers to the point that they could overdose. I can't decide if this horrible addition is better or worse than using sawdust to bulk up the food rations you use in the base game.

We can't have workers dying left and right, so that's where safety measures come in—another of of The Last Autumns most important systems. If you decide to cheap out and not to engage in these measures then the workers will go on strike, and who can blame them? There's heavy machinery, underground collapses, and toxic fumes spilling out of the hole.

In my first playthrough I listen to my workers. I give them everything they want; I research better safety measures in all working places; I sign a law giving them shorter hours; I make sure that they eat hearty meals (no cocaine pills, I promise). This all takes time and resources, which I don't mind, but if you fall behind the British Empire's schedule they will fire you. Unfortunately, this happened to Chris when he tried to form a labour union. You are put in a little dingy and sent back to Britain, that's if the frost doesn't get you sooner.

Another difference in The Last Autumn is that there is a divide between workers and engineers. The underlying tension between the two groups can force you to pick a side, echoing the faith vs order decisions in the base game. Supporting one or the other will yield different advantages and consequences. You think a child workforce was bad enough, now you have to decide if you want to sign off on a group of strikebreakers employed to inflict violence against workers who just want better working conditions.

11 bit say that it's a difficult scenario, even if you're a seasoned Frostpunk player. It's certainly tough, and I've only made it to stage three so far.

"Our most dedicated fanbase excels at finding challenges and ways to beat Frostpunk even on hardest difficulties and we wanted to provide them with something that will reward their expert knowledge of the game, while still staying fresh," Stokalski says. "At the same time mood and narrative are central to this scenario, as it always is with Frostpunk. Lower difficulties should scale well to those players who want to experience mostly the story, but the challenge of the task is inherent to the experience of this scenario and Frostpunk in general. The end of the world is no walk in the park."

It might be a difficult scenario but there are many different routes and choices that keep me returning to The Last Autumn to try again, and again, and again. It has plenty of new ideas and surprises that separate it from the core game, and it's one of the best expansions from 11 bit studios yet. Frostpunk came out two years ago, and 11 bit are still finding new ways to tell the story of their frozen world.