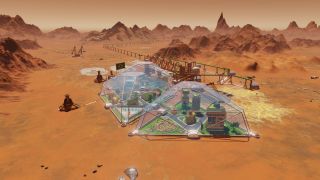 The colony desperately needed botanists. Well, it really needed food, but that wasn’t going to happen without the appropriate specialists running the farms. Starvation was imminent, the prospective pool of recruits back home wasn’t good enough and the colony was in trouble. With disaster nipping at my heels, it was one of Surviving Mars: Space Race’s rival colonies that saved the day.

Space Race follows the Paradox DLC model. It’s a meaty expansion that brings with it some significant changes and, importantly, gives every player something new thanks to the free features that accompany the paid ones. The most significant of the premium additions is the titular space race. Instead of having the red planet all to yourself, you can optionally share it with up to three competing colonies.

You can’t visit these colonies, but you can see their location on Mars via the new planetary screen, from which you can get their vital statistics—population, number of buildings, resources—and call them up. There’s trade, espionage, even a bit of charity. It’s a whole family of systems, so you’d probably expect them to have a big, noticeable impact right from the get-go, but my first few hours fiddling with my new colony didn’t inspire me to interact with my rivals at all.

That’s not to say that it was all business as usual. I was playing with one of the new mission sponsors, Brazil. Every sponsor now comes with a unique building or vehicle, and Brazil provided my burgeoning colony with an extremely handy refinery that turned the utterly useless waste rock generated by other buildings into resources that could be exported to Earth. Exports in general also earn more cash.

Picking a mission sponsor now feels more like picking a faction. Your choice encourages a particular approach, not just through the traits and extra tools, but through bespoke objectives that dole out big rewards. The objectives themselves are a bit plain and too easy to forget about, but it’s convenient simply to have a checklist of things to do, giving you some direction.

Doling out a few quid more for Space Race Plus also gets you some extra cosmetic options. They’re not remotely essential and DLC for DLC is always cheeky, but they do spruce the place up, particularly the domes. You can given them blinds if you want, but watch out, they get filthy with Martian dust.

On the subject of domes, they can now be linked up! This feature arrived in an earlier free update but having not played for a while, it’s still new to me. It means colonists can independently move between linked domes, travelling through tubes. Services, power and life support get shared by the network, too. It’s extremely convenient and takes some micromanagement pressure off you.

While I was working away, expanding my colony, I got intermittent messages from my rivals, offering trade deals. Rather than picking resources to trade, you have to wait for your rivals to offer you a specific swap, like some of your concrete for some of their metal. Early on, none of the deals were asking for anything I had in abundance, so I just learned to ignore them. It wasn’t until disaster was looming that I felt compelled to see if I could exploit my rivals.

I finally had resources to trade, but the one thing colonies won’t trade is, not surprisingly, colonists. I could have held out for a food deal, but then I’d be reliant on that finite trade route, and I’d have to keep supplying the colony with another resource. There was another option, however. Covert missions can be undertaken to sabotage rival colonies, steal tech and kidnap ('recruit' is definitely a euphemism) colonists. Unfortunately, you can’t specify a specific type of specialist, like a botanist, but it’s still a viable way of filling in gaps. It also really pisses off the other colony.

Before that point, I’d never really considered the other colonies to be my opponents, which is strange, given how Space Race is framed as a competition. They just don’t really act like adversaries. They might scan a planetary anomaly before you do, or reach a milestone, taking a potential reward away from you, but they don’t seem to be in a rush to do that either. Even when they beat you to the punch, it doesn’t really feel like a setback.

The exception to this is when the rival colonies intersect with the new events system. Inspired by Paradox’s grand strategy romps, Space Race throws random narrative events into the mix that confront you with a few choices. Earlier in the game, my colony discovered lots of food inside an unmarked rocket, which nobody was claiming. I decided to bring it into the dome. Big mistake! It had been tampered with by a rival and caused a mini-crisis. Often, they flesh out things that were just glossed over before. Instead of just finding out one of your colonists is unstable, you might instead get an event where they go on a rampage and you have to decide how best to deal with them.

All the flavour text gives the colony and its inhabitants a lot more character, but it’s more than fluff, getting you directly involved with these problems and story arcs. It’s not overt, but it does feel a little bit like you’re defining your colony through these choices. Sometimes you’re just trying to make the best of a shitty situation, but there’s occasionally a moral component. Upon discovering that a colonist is a troubled savant, for instance, you can choose to sympathise, but you can also choose to see it as an opportunity, exploiting someone vulnerable.

It wasn’t until I started pissing off my rivals that it started to feel like a race. Annoying them is a risk, of course. They’re not going to offer any trade deals to someone who’s pinching their tech and colonists. I was ready for some pushback. This came in the form of one of my competitors trying to undercut me back on Earth, selling resources for 25 percent less. Since I was loaded, I reckoned I could take the hit, choosing to let the event run its course. They couldn’t afford to do it forever. And that’s how I became the richest man in the solar system, somehow.

Instead of reducing the amount of money I earned exporting stuff to Earth, it multiplied it by… well, a very big number. Instead of making millions with each cargo rocket, I was making billions. It was very generous, but the bug also meant every obstacle became barely a blip on my radar. Resource scarcity is the the ultimate source of almost every problem in Surviving Mars, but with a nearly infinite supply of cash, I could just keep importing food and metal and all the other stuff I needed from Earth. Just when things were getting a bit competitive, Space Race gave me some rocket boots and launched me towards the finish line.

I expect I’ll take another crack at nurturing a colony when Surviving Mars: Space Race launches later today. It was a frustrating end for my first attempt, but up until that point I was enjoying revisiting the dusty planet. The rival colonies could definitely do with being more aggressive, but each new system ends up making Surviving Mars a richer management game. I just wish it hadn’t made me so rich.