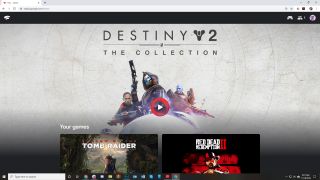 The big pitch for Google Stadia is that you can play your games practically anywhere, as long as you have a fast internet connection. No worrying about downloads or installs. Like super-powered cloud saving, you can easily stop playing in the living room, hop onto your laptop, and pick up right where you left off.

Stadia has had a poor launch, and is missing some big features, including the ability to play at 4K resolution on your PC. But you can play on PC, without any extra hardware needed. Here's a rundown of how to play Stadia on PC, and what it currently does (and doesn't) support.

You don't need any special hardware or software to stream Stadia games to your PC, just a web browser. Specifically, Google Chrome.

To start using Stadia, head to Stadia.Google.com and login to your account. That's all it takes to get going; you should be greeted by a big launch button for the last game you played.

You can play with mouse and keyboard

Launch a Stadia game from Chrome, and it should support mouse and keyboard controls by default. Whether you can rebind keys or not will depend on the options available in each individual game.

Closing games can be a bit confusing, because "Quit" isn't always a main menu option. Plus, Stadia always makes your Chrome browser go fullscreen when it launches a game. To quit, simply hold the ESC key for 3 seconds and a Stadia overlay will pop up, letting you exit the game. Or you can hit F11 to drop out of fullscreen and leave the game running in your browser while you do something else.

Not every Stadia game is ideal for keyboard and mouse, but thankfully at launch the basic console controllers are compatible with Chrome. Here's what Stadia officially supports.

I used the Xbox, Stadia, and PS4 controllers over USB, and all performed flawlessly. Hot swapping even worked great—you can plug in a controller while a game is running, or unplug one and plug in another, without issue, at least in Shadow of the Tomb Raider.

Because Steam now supports and lets you configure basically any third party controller, you should also be able to use controllers that Stadia doesn't officially support, as long as Steam is running. Just be aware that your Steam controller profiles may not play nice with Stadia; my Switch Pro profile confused Stadia into thinking both the A and B buttons were the same input.

On TVs via the Chromecast Ultra, Stadia supports 4K, HDR streaming with 5.1 Surround. On PC, you're limited to 1080p streaming until sometime in 2020.

Stadia is lacking some major features, period, but PC is specifically missing some features that are available on Chromecast and Android. Here are the menu entries you can't currently use on PC:

You also can't view your screenshot captures on PC, only mobile.

How does Stadia compare to PC gaming?

Stadia is brand new, and many of its missing features will presumably trickle into place over time. The good news is that when it has a strong internet connection, it's hard to detect any latency in Stadia's performance. It's good for singleplayer games, though if you're playing multiplayer, it may put you at a small disadvantage.

The bigger concerns are Stadia's graphics options and image quality. Bad news on the first front: None of the Stadia games we've tested have graphics options, which makes it hard to tell how they compare to a native PC game. It also means you can't choose an ultrawide aspect ratio for a 21:9 monitor, or make other tweaks for your personal setup.

Stadia is limited to 60 fps, unlike many native PC games, which can run at 144 fps and beyond.

And as for image quality: Despite claims that Stadia can run at up to 4K (again, currently not on PC, only on Chromecast Ultras), the games themselves do not seem to be rendering at 4K. Instead they're being upscaled from lower resolutions. Bungie told The Verge that Destiny 2 runs at 1080p and the equivalent of medium settings—a far cry from what you could get on a powerful PC.

We're looking into what resolution and settings all Stadia's games run at, but it's safe to say for now that if you care about resolution, framerate, and graphics settings, Stadia is a poor substitute for a gaming PC.