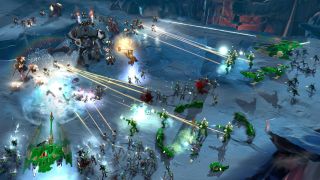 Dawn of War 3 campaign lead Brent Disbrow says the team wants to “quite honestly raise our game” with the singleplayer campaign for Dawn of War 2. That's quite a claim from the studio that crafted Homeworld's story, and built some top class singleplayer missions such as Carentan Counterattack in Company of Heroes.

The studio has experimented with different singleplayer formats over the years, from the territorial system map of Soulstorm to more conventional linear campaigns. Dawn of War 3 will be different again, jumping from faction to faction with each mission as Space Marine, Eldar and Ork forces move to seize a powerful, nameless weapon.

“One thing that was really important to me and to Frank and other members of the team to show off the three factions quickly in the campaign rather than have the system where you play through like an entire act as one race and then an entire act as another race”, says game director Phillippe Boulle. “That's always fun except if you're the fan of the third race and then you feel that you have to wait for two-thirds of the campaign.”

The format serves a few other purposes. It provides a varied and lore-light introduction to the universe for newcomers, quickly communicating the personality and capability of each faction. The Space Marines are a heavily armoured phalanx that strikes from the sky with super weapons. The Eldar are, as Disbrow describes them, the “sword wind”—masters of hit and run tactics. The Orks are a “maniac horde” who overrun enemies with sheer numbers. “They field the most bodies of any of the armies on the field of battle,” says Disbrow. “It's like a group of tazmanian devils from Looney Tunes.”

The campaign structure allows each faction to grow in power as the conflict escalates. As the story moves on, new objectives and rules are introduced and new elite units unlock, adding tactical depth. These heroes are vital, bringing Dawn of War 2's character development and micro abilities to Dawn of War 3's busier battlefields. “We wanted to take the epic scale of Dawn of War 1, the large over-the-top battles, and inject into that the awesome heroes from Dawn of War 2, make them the centrepoint of that battle, but have the battle be as large as Dawn of War 1, and bigger still” says Boulle.

Dawn of War 3 moves away from Dawn of War 2's heavy reliance on wargear. Levelling heroes up will unlock new abilities, but each elite's role is carefully defined, as Boulle explains. “One of the things with a really deep equipment system is that you can move units, they become a little mushy—they can do a little bit of everything. Dawn of War 3 units are built to do specific things. You unlock the option to make them do those things in a slightly different way but Gabriel is still an up-close melee brawler tank and Soleria [the Imperial Knight] is always going to be a ranged powerhouse.”

Each army has three elite slots that you fill before each battle. One of those slots will almost always be occupied by the army's leading hero character—Blood Raven captain Gabriel Angelos, in the case of the Space Marines. The other two slots can house super units such as the Imperial Knight, elite squads, or other individual heroes.

“We're going to suggest what heroes you might take in on a given mission, but we're going to let the player choose as well” says Boulle. “If you don't really know what you're doing there's a suggested hero selection for this mission. If you do, but you want to try something else, there's room to do that so you can experiment. That gives you the opportunity to learn more of the elites.”

Relic suggests that there will be a wide variety of elites to choose from, for all three factions. Since Dawn of War 2, hero customisation and progression has been a key part of the series. We'll have to wait and see how Dawn of War 3's wide range of heroes plays, not just in the campaign, but in multiplayer too. That's where players' favourite hero combinations will be put to the ultimate test.