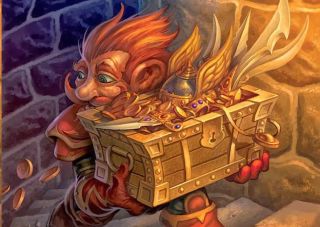 The video above is a pack opening we did on Monday of 60+ packs from The Grand Tournament.

Hearthstone’s new expansion The Grand Tournament (TGT) is out today, which means there are 132 new cards to for players to pull from packs bought with in-game gold or cold hard actual cash. But how far does your money actually go when investing in The Grand Tournament? A few friendly redditors took it upon themselves to do the math(s) for us, and it looks like how much your overall spending returns in The Grand Tournament depends entirely on what kind of player you are.

What will 50 card packs likely net?

Most people looking to invest in TGT pre-ordered the 50 card pack for $49.99 (USD), which many will link to the price of an entirely new game. Using it as a baseline, Reddit user BetaKeyTakeaway used existing data to calculate what percentages of the cards a given player can expect to get from 50 card packs. Note: The pre-order 50 card pack option is no longer available, but these estimates will likely land in the same ballpark as a 60 or 40 card pack bundle. Here’s the expected results:

This boils down to around 50% of the total TGT cards, which is more than enough for the average player. It gets a bit harder to predict the bang for your buck when it comes to rarer cards though, since they can be the linchpin in certain decks. Read more in the Reddit thread here.

How many card packs will it take to collect all TGT cards?

Redditor Rkynick ran a convenient set of simulations to test how many card packs it would take to theoretically complete the 132 TGT card set. He breaks down exactly how he did so in the thread, so go there for the nitty gritty. The basic jist is that there are severely diminishing returns when buying card packs at around 80% completion, or 200 card packs deep, if ignoring crafting.

Factor in crafting, and the curve changes significantly, giving an estimate of 75% completion after opening 100 card packs.

The lesson here: if you intend to brute force your way to a potentially complete TGT set, expect to spend a couple of hundred dollars.

How much should you actually spend?

So the charts are somewhat intimidating. To collect everything quickly means spending a lot of money, which is where the P2W accusations come in. But that perspective assumes that in order to compete in Hearthstone, every card is required, which is completely off point. In the Youtube video embedded below, streamer Kripparian breaks down why collecting every card is fairly absurd and wholly unnecessary.

In essence, only select cards are needed for to stay afloat. The rest are “balanced,” but exist more for novelty and variety rather than as pillars of competitive play. This is subject to change, of course, but there’s not need to bullrush in and snatch up everything immediately. In fact, once you've got some dust, why not focus the top 10 cards cards picked by Tempo Storm's Reynad as likely being the most OP of the new set.

Of course, if you choose not to spend any money in Hearthstone, it’s still very possible to remain competitive with the vanilla set, just don’t expect to build your collection quickly. Gold and dust are sure ways to get new cards, but they remain slow as ever. Arena mode doesn’t exclusively give reward packs for TGT, it instead randomly selects from the current sets to build rewards from.

Overall, just be sensible. Resist the urge to get every card right away. Most of what a competitive player needs will come with time and patience (and about $40-$60, just to be safe).