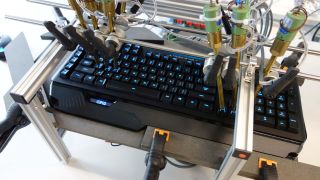 Logitech was once the premier PC gaming peripheral brand, but over the better part of a decade, the company shifted gears and started focusing on console accessories and other endeavors. In the years since, companies like Corsair, Razer, and SteelSeries have swooped in to take thunder away from the Switzerland-based company. With PC gaming being as big as it is today, Logitech tells us its wants to win back the hearts (and hands) of PC gamers everywhere.

To show us its commitment to the PC market, Logitech invited us to its testing facility in Lausanne, Switzerland. The location is a vital part of the design process, as the company works with EPFL—one of the top engineering universities in Europe—which is located right next door. In addition to working with students from the university, Logitech is also working with professional gamers from League of Legends, Dota 2, and Counter-Strike. The logic here is that if it’s good enough for the pros, then it’s good enough for the Joes.

At the facility, we toured the company’s keyboard and mouse labs. This article focuses on the company’s testing and design philosophies as they pertain to redesigning the mechanical keyboard. Here is the gaming mice portion of the write-up.

If you’re unaware, Logitech recently released its G910 Orion Spark mechanical keyboard , which is a unique offering in that unlike 90-plus percent of all other mechanical keyboards out there, it doesn't use Cherry MX switches. Instead the company opted to design its own switch.

We sat down with Logitech to discuss its new Romer-G switch type.

The problem with Cherry MX switches, asserts Logitech, is that they were designed over 25 years ago and were meant for typing. With that premise, the company thought the formula could use some tweaking for gaming. According to Logitech, for instance, Cherry MX keys take four millimeters to bottom out. While that isn’t a huge delay, the company set out to lessen it. Logitech worked for two years with Japanese company Omron to design an exclusive switch, and dubbed it Romer-G. Logitech says the Romer-G is 25 percent faster, taking only three millimeters to bottom out.

Another problem that Cherry MX keys face pertains to LED backlighting. If you’re sitting in front of an LED-backlit keyboard with Cherry MX switches, you may notice that only the top character of any given keycap is illuminated. This is because the lighting feature is generally tacked on above the Cherry MX switches. Logitech admits that this isn’t a huge problem with English-language keyboards, but that it can ruin the experience on Korean-language keyboards, which often use both the top and bottom halves of the keycaps to display a character. To remedy this, rather than placing the LED light above the switch, Romer-G keys integrate the lights directly on top of the t-shaped center of the switches themselves. The result is a much more uniform lighting experience, which is able to highlight all parts of a keycap evenly.

The Romer-G keys provide an even lighting experience.

Speaking of keyboard lighting, the G910 Orion Spark only requires one USB cable to power both the keyboard and its RGB lighting. This is a bit of an anomaly, considering Corsair’s similar K70 RGB requires two separate USB cables, as do others. Usually, getting enough power from one USB cable to power both elements is tough. Many gamers like having the option of getting ample light out of their keyboards, but that often ends up requiring lots of power, especially when you throw multicolored keycaps into the mix. And though it’s not something users might realize off the bat, inconsistent lighting can really taint a keyboard. Things start looking like a jumbled mess if some keycaps are brighter than others. According to Logitech, achieving an extremely bright keyboard uniformity is pretty much impossible, given the constraints of a single USB port, which the company was adamant about delivering. It’s much easier to achieve uniformity at dimmer levels, but there’s a point where it gets so dim that users are dissatisfied. Logitech admitted that it had to play the balancing game between both spectrums, but feels it achieved a happy medium with its solution.

Logitech uses machines to test its keyboard for up to 70 million clicks.

One area in which Logitech hopes its customers are happy pertains to its rigorous testing methodology. The company guarantees its keyboards for up to 70 million cycles (clicks), which it claims is about 20 million more than its competitors. It does its testing using high-speed machines that can press keys 13 times a second (the limit of these robots). The machines do this for 62 days and, voilà! That’s where you get your 70 million clicks. What aids in the durability of its new switch types is dual-redundancy actuators. So if you spill Coke on your keyboard and one actuator gives out, there is a second actuator that acts as a backup.

We're not entirely sold on the new indented keys, but Logitech says they're optimal for gaming tactility.

Another modification that Logitech incorporated into its Romer-G keys is the implementation of indented keys. We’re not sure how we feel about these keys yet, as there is a definite period of adjustment moving from the more traditional flat-facing keycap designs. Logitech says its internal surveys show that these indented keys provided a greater sense of tactility when gaming. The company claims that you really know when you click down on a button, as a result. Though initially too aggressive with the depth of its indentation (users reported that it hindered word-processing experiences), the company scaled back the depth .5 millimeters.

In the video above, a truck runs over Logitech's G910 keyboard and all the LED lights still seem to work.

Beyond all the work that Logitech is doing on the hardware side, the company is also pushing its Arx Control mobile app. Compatible across Android and iOS devices, Logitech is working with game developers such as Valve, with the goal of allowing users to one day view in-game minimaps on their mobile devices. The app will also allow you to view your PC’s temperatures. The company’s G910 keyboard conveniently has a slot up at the top that allows you to drop in your phone or tablet of choice.

Logitech gives us a demo of what it's Arx Pax software can potentially do.

The G910 Orion Spark is available now. Expect a full review of the keyboard in the magazine in the near future.