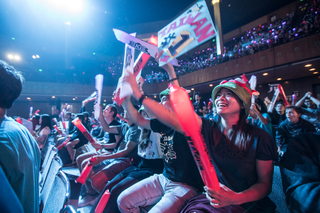 There’s a point that comes up again and again: fans are the true lifeblood of League of Legends. When the servers were struggling under League’s enormous popularity in Riot’s infancy, it was fans who footed the bill by happily buying RP to dress up their favourite champions and expand their rosters. When teams were talking about the struggle of an economic crunch, it was noted that top players could escape the trap via streaming and fan support. Teams put plenty of hours into their social media to reach out to the fans and keep them engaged with the brand and their players. Reddit AMAs? For the fans. The shoutouts at the end of post-game interviews are for the fans as well.

Despite this, there doesn’t really seem to be an agreement on what makes a fan, or a determined science on how to hold onto them. This is becoming especially apparent around the Worlds Championship, as teams scrap in groups. Some teams are overcoming low expectations, and others are getting beat into the dirt. As always, there are folks climbing aboard bandwagons and wearing their team colors. With the World Championship underway, this seems the best time to really take a look at how teams can find fans and hold onto them through thick and thin.

Winning teams are more likely to accumulate fans, and losing teams are likely to shed them. This is pretty obvious, and it’s the first factor that people consider. We’ve all seen hordes of loud, argumentative League players flock to whichever team has had the best and most recent success. When Fnatic made the semi finals at Worlds, fans were singing the praises of the team and swearing that they had always been a fan. When the team began to struggle post-Worlds with the roster changes, suddenly those fans weren’t quite so loud. ROX, SKT, TSM, Fnatic... Any team who had made an impact will be followed by these bandwagoners.

Let’s not pretend as though that’s the only way to get ahead, though. Consider the Renegades. The team entered the LCS with a roster with a lot of room for improvement, but also a lot of charm. Their video The Road Ahead was charming and clever and fun. So, I sat down and strapped in to cheer for this team all throughout their rookie Split. There were some early roster changes due to factors outside their control, which happens, but the entire roster was shuffled around throughout the entire Split until, like Frankenstein’s monster, they rose and succeeded but at a terrible cost. I couldn’t cheer for the team anymore. They were winners, but they weren’t my winners.

Phoenix1 and Roccat both share some interesting qualities: they both have had terrible records at times, but they managed to collect a gathering of fans despite that. Phoenix1 were optimistic in the face of a 0-9 record, and when they turned it around, they played it off with braggadocio and charm. “Sure,” their attitude said. “We meant to throw those early games. It wouldn’t be fair otherwise.” Roccat’s fanbase, interestingly enough, came from their social media guy—a representative on Reddit who was friendly, open, and ever-present. NRG tried to bank on this strategy by picking up friendly, open players like KiWiKiD and Santorin, hoping to build a fanbase... But they weren’t able to capitalize on this element of their roster before being sent out of the LCS through relegations.

It’s also important to note that personality doesn’t mean likability. G2 Esports’ entire brand is being the ‘bad boys’ of competitive League. You can go ahead and hate them, just as long as you care about them and watch their games. It’s an interesting tactic that has paid off in spades, marketing wise, but there’s just one problem...

If we had an equation on a blackboard, we’d have personality and success in the mix, but there’s a third factor that’s much harder to pin down: sustainability. What does this mean? Obviously, an organization has to be able to run and keep the lights on to maintain fans, but that’s not what I mean. Sustainability is the ability to set goals and achieve them, or at least show enough progress that fans can buy into the story and the struggle. TSM have been saying that they’ve wanted to win Worlds for years now, and no one really expects them to take the crown, but every year it seems like they get a little closer. Even when they struggle, like the Split where they entered playoffs at sixth place, they take the fall deadly seriously and immediately double down and work harder. TSM have had an upwards trend over the years, and so it’s easy to follow their story and root for them.

Phoenix1 doesn’t have goals as lofty as Worlds, but they have set a standard for themselves. They are underdogs and king killers, a feisty team who can take the top contenders by surprise with off-meta picks and aggression. Their legend will continue to grow next Split even if they end up in the lower ranks, as long as they take a few essential games and keep that narrative up.

G2, however, do not currently have a sustainable narrative. The idea that they’re the bad boys who keep winning, the guys you love to hate, only works as long as they’re winning... and every time they’ve reached the international stage, they've hit a wall. Sure, they’re the two time European champions, but Europe’s lacklustre performance at Worlds diminishes this accomplishment.

Worlds, and the big tournaments, always bring out the best in the League fan community. Fans are the unsung heroes of esports, the fuel that keeps the giant machine turning. Every esports organization lives and dies on the support of fans, and while some teams naturally stumble into the right approach to hit it big (or scrape together support after years of trial and error). As Worlds continues, some teams will earn new fans while other teams will bleed support. Of course, there’s always going to be variation in what individual people find exciting. Another constant? Everyone can unite together in loathing the bandwagoners who shout everyone else down.