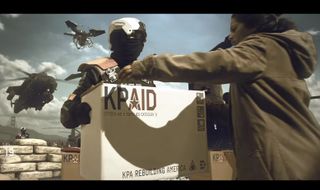 “America Has Fallen” is the non-too-subtle title of Homefront: The Revolution's opening cinematic, and that's pretty much exactly what's happened. But the Korean People's Army didn't kick down your door on its way to kicking your ass. No, as it turns out, you invited them in.

The history of Homefront diverges from our own all the way back in the early 70s, when North Korea's Apex Corporation started pumping out the world's best whiz-bang techno-gadgetry. Eventually, phones and tablets gave way to cutting-edge weapon systems—naturally—which the US military machine happily snapped up. But the weight of its wars got out of control, bills went unpaid, and eventually the Democratic People's Republic of Korea played its trump card: It flipped the switch, and the lights went out.

You'd think somebody would've checked for something like that ahead of time.

Anyway, the KPA launched an aid program, poured in supplies, guys, and guns, and before you could say “Please, sir, I want some more,” it was Norks—“Norks” being the made-up Homefront slur for North Koreans—as far as the eye could see. And here we are!

Homefront: The Revolution comes out on May 20. Our hands-on, in which we explain how to be a bad revolutionary, is here.