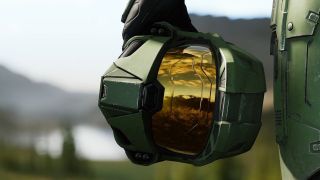 Not long after Halo Infinite was unveiled, lead writer Jeff Easterling responded to a question about a possible battle royale mode with: "I'll tell you right now, the only 'BR' we're really interested in is 'Battle Rifle'." Despite rumours to the contrary, it sounds like the sentiment hasn't changed.

A report from Brad Sams claimed that 343 Industries was working on a battle royale mode for the upcoming shooter, and while it was light on details, more were promised. On ResetEra, however, Halo director Frank O'Conner said otherwise. While 343 isn't ready to reveal exactly what Halo Infinite will launch with, he said it won't include a battle royale mode.

"We will not talk about the launch content of Halo Infinite until we're ready," O'Conner wrote. "I haven't watched the video so if I am misinterpreting the headline as 'Halo Infinite is launching with/as a Halo battle royale mode' that is still not the case. You can probably make your own battle royale mode in Forge even right now though."

The modes that will feature aren't yet defined and O'Conner notes that they can change until quite late in development. Some of the elements of battle royales, like big social, emergent stuff, are things the team would like to explore, but don't expect to get flung out of a plane with 99 other players.

So if you want to play a Halo battle royale mode, you'll have to make it yourself.

Here's everything we know about Halo Infinite so far.