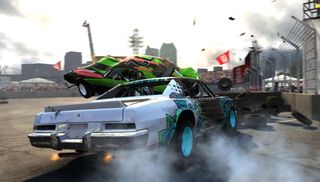 It's Friday afternoon and, while that's no guarantee of where (or when) you'll be reading this from, as far as I'm concerned, it's a time for relaxing. And what better way to enjoy the end of the work week than with a bunch of cars smashing all up into each other?

Alternatively, what better way to take out your still-working frustration, than with a bunch of cars smashing all up into each other? That's what you'll get with Grid 2's Demolition Derby update, which has now been trailerated.

The Demolition Derby update, which you can read about here , is out now.

It's far from the only "cars smashing up into cars" action we've had recently, either. Bugbear's crunchy Next Car Game is still crowdfunding, and alpha physics thing BeamNG still looks gorgeous (and deadly). Seriously, look at it: