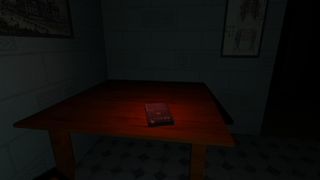 We talk about dread a lot when the subject of horror games come up. It's what the best horror is about—anticipation and imagination, half-heard sounds and glimpsed shapes. It keeps you dangling on the hook, wondering what the fish will look like.

Anatomy is a perfect example. All you know is that you're exploring a darkened house hunting for cassette tapes. Each open doorway is perfect blackness until you walk through it, then pace out the corners of rooms in what seems like an ordinary suburban home. You find a cassette, walk back to the room with the tape player, and then have to stand there in the pool of red light it casts just waiting while it plays a snippet of spooky philosophical rambling about the psychogeography of houses and how they relate to human anatomy.

At first this is literally the entire game. I won't spoil where it goes from there, but I will tell you that at some point Anatomy simply stops running. The program closes, disentangling you from the hook to stare at your operating system. Anatomy isn't done with you, though. It's waiting for you to muster the courage to start it again.

When you do, things are different. The VHS lines that wash over the screen are more frequent, the audio is distorted, and the house is different. Like a tape that's been played too many times it's degraded. There's a word: Things can be degraded both in the simple sense of lowering their quality, but also in terms of degenerating, of debasing, of growing further into abnormality.

Then Anatomy stops running for a second time and you're staring at the screen and you really don't want to run that .exe again.

If it was just pushing you back to a prior checkpoint or even the menu it wouldn't have the same effect. The momentum of playing a game would continue, carrying straight on would be a relatively frictionless decision. But because the game's stopped completely, it's a bit more tempting to stop playing. To just quickly check your email or get a snack or maybe play something else.

Actually running Anatomy.exe suddenly feels like a weighty decision, one that's deliberate and so requires deliberation, and everything that happens afterward will therefore be your own fault. That's dread, and the fact that Anatomy imbues the act of double-clicking an icon with such a powerful emotion is a hell of an achievement.