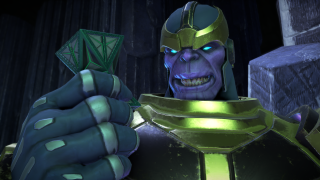 Guardians of the Galaxy: The Telltale Series

(Spoilers for Telltale’s Guardians of the Galaxy and Avengers: Endgame)

Both Marvel comics and the movies based upon them have long set Thanos up to be one of the greatest, most terrible, and most fearsome villains any superhero has ever faced. In the films, it took the might of every character we’ve ever seen in the franchise to bring him down.

Which is why it was so brilliant and unexpected when Telltale's Guardians of the Galaxy series had Rocket Raccoon blast him straight to oblivion in the very first episode.

The big moment is preceded by an intense, frantic quicktime sequence battle that shows Thanos as more than a match for all the Guardians put together. Surely, this would be just one of many clashes we'd have with him in the series? Surely he'd be the main villain to strive against? But… nope. The huge, ridiculous gun Rocket had been tinkering with (almost blowing up the Milano in the process) bores an impressive hole right through the Mad Titan, ending the fight, and his life. It's not a fake-out. It's not a clone or a hologram. Peter Quill reflects the shock and incredulity we’re all feeling in that moment. Thanos is… actually dead?

We don't have long to stare agape at the fallen villain as Hall and Oates' You Make My Dreams (Come True) slowly fades in, mimicking James Gunn's fantastic use of classic radio hits in the live-action films. We're taken to a space bar where the normally outcast Guardians are being treated as proper heroes for once. We did it! We saved the galaxy and brought down one of its greatest threats! Drax got revenge for his family! Gamora is free from her evil step-father! Of course, we've got four whole episodes to go, so it doesn’t end up being that simple. But removing the obvious threat right off the bat and making the rest of the season about, “What now?” allowed Telltale to tell a much more personal, interesting, and unconventional tale about these characters.

Avengers: Endgame asked similar questions about its heroes after they behead Thanos very early in that film, but Telltale's Guardians did it first. And they didn't even need to bring the big guy back later to raise the stakes.