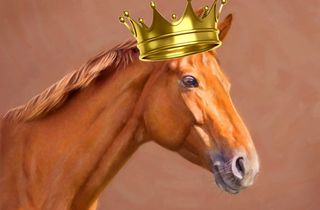 When you've played over 1,200 hours of Crusader Kings 2 like I have, becoming a king seems like a formality. The game hasn't really started until you've put that crown on your head and bid all the dukes and counts in your realm kneel in fealty. I've got to the point where I challenge myself to see how quickly I can accomplish it, but it never compares to the very first time.

Starting as a lowly count when you're new to the game, kingship seems like such a distant and unattainable thing. If you're lucky maybe you’ll be a duke some day. How could your aspirations possibly reach beyond that? How could you imagine yourself a peer to the Capets or the Plantagenets who could crush you under their royal heels at any moment? You don't even feel like you're playing the same game they are, reigning from a modest castle in the middle of some muddy stretch of countryside.

So you start to fabricate claims on your neighbors and maybe maneuver to have your heir inherit some land from your spouse's side. Your realm grows. Eventually, you have enough holdings, cash, and piety to proclaim yourself a Duke. You're no king yet, but you've come a long way from where you started. At least kings respect your opinion now, and those lowly counts, standing in the same place you were not long ago, have no choice but to follow your commands.

Maybe it takes two generations. Maybe it takes five, or even 10. But your ambitions grow along with the scope of your lands and the size of your armies. Your anticipation grows and leads you to bolder and more terrifying conquests, some of which will pay off while others might land you in a heap of trouble. Finally, the day comes you see that once-grey Found Kingdom button light up. With a simple click, you gain a gold border around your portrait and that auspicious title: King (or Queen). The journey has been difficult, but you may now count yourself among the most powerful monarchs in all the land. Hoary Dukes kneel before you and even the scions of Charlemagne begrudgingly count you their equal.

If you've made it this far, chances are it won’t be the last time. You'll wear many more crowns throughout your CK2 career. One day, you may even be proclaimed an emperor. But none of them will sit quite as sweetly atop your head as this one, which elevated you forever from obscurity into royalty. But of course, heavy lies the crown and you must not celebrate over long. There are likely still lords in the kingdom—your kingdom—who do not yet recognize your authority. It's time you gave them a choice: bend the knee, or be replaced by someone who will. This is just the beginning.