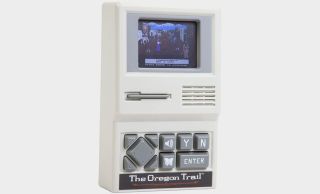 The Oregon Trail is one of the oldest video game series around, with the first text-based game dating back to 1971. The 1985 version for the Apple II (followed by a DOS port in 1990) is the one most people are familiar with, and now you can get the game in a fun retro handheld for just $8.49 from Target.

This handheld version offers simple controls and is powered by three AA batteries (which are included). It emulates the DOS release, so it's more or less the same experience as the 1985 classic—just in handheld form. You start in Independence Missouri with a wagon, and you must complete the journey to Willamette Valley in Oregon, fighting dysentery, hunting for food, crossing rivers, and more along the way.

While you can easily play the original PC game in your browser, this might make a fun distraction, or it might be a fun gift for anyone who likes classic games. Oregon Ho!

Handheld Oregon Trail Game | $8.49 ($8.50 off)
This handheld version of the classic DOS game is 50 pecent off right now from Target online. It's also available in most physical Target stores.View Deal