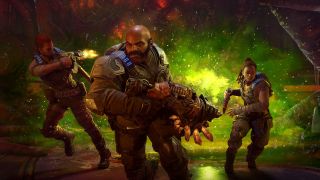 At AMD's "Next Horizon Gaming" E3 press conference, we got a few minutes of Gears 5, as The Coalition's Rod Fergusson and Mike Raynor came on stage to talk tech. While most of the time was spent going over information about Gears 5 we already knew, and talking up AMD's hardware, this was a cool tidbit to have confirmed: Gears 5's new Escape mode will support three-player splitscreen on PC.

Given how robust the Gears of War 4 PC version was, and Microsoft's renewed focus on PC gaming, this isn't a huge surprise. But it's still cool, since splitscreen is often a feature in console games that's left out of PC games. Sure, splitscreen on a monitor isn't necessarily a great experience, but these days a whole lot of us have big 1440p or 4K screens on our desks, connect our PCs to our living room TVs, or use in-home streaming to put our games on the big screen.

Mike Raynor, The Coalition's technical director, also dropped a few more details about the PC version: it'll support 4K and ultrawide resolutions, HDR, and uncapped framerates. And he spoke a bit about the next-gen Xbox having similar AMD hardware to what's inside many PCs:

Gears 5 is out in September.