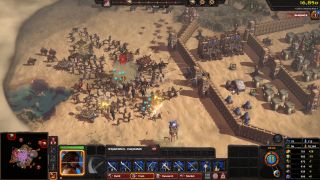 They Are Billions was a refreshing take on what has always been the most fun way to play RTS games: turtling. It helped coin the idea of the "survival" RTS, a game where you spend most of your time building a base to collect resources to survive waves of enemies, much like in a tower defense game. Funcom's Conan Unconquered, which is out on May 30, doesn't do anything particularly new with this idea, but it has co-op, and that is a very good thing.

My favorite RTS memories ever are from playing Command & Conquer: Red Alert 2 online with friends. We'd team up against a bunch of hard enemy bots and treat the game like a survival RTS, building our bases right next to each other and specializing in different defensive options that were fearsome when combined. I'd play as France and build the massive, long-range Grand Cannons while one of my friends frantically built and rebuilt layers of concrete walls in front of them to keep enemy tanks out of range. Anyway, Conan Unconquered is being made by Petroglyph, a studio comprised of former Command & Conquer devs, so that wasn't a totally pointless tangent.

I played about half an hour of Conan Unconquered during GDC last week, which was enough to get a taste for the absolute basics. My co-op partner and I could each build structures and control our own units, and we had separate money pools. But crucially, our income and resource-earning was identical, based on the total number of farms and other resource-granting buildings we made. This allowed for specialization: I could've focused on building up our economy while he focused on the army, if we were coordinated enough.

Every few minutes, hordes of enemies come pouring in from different directions on the map, and we needed troops, guard towers, and walls to hold them off. Conan Unconquered also gives you heroes (like, erm, Conan) who are much tougher and can use a special ability in battle. If they die, they'll respawn after a cooldown.

I really satisfied my RTS turtling itch by building a wall around the southern half of our base, then placing guard towers behind it and filling them with units who could throw spears down at the hordes. Like They Are Billions, the theme is getting attacked by tons of enemies at once, who were all extremely weak at the start but will doubtless grow stronger and more varied over the course of the game. There's some value in exploring the map, here, killing random creatures to level up your heroes and have greater vision on where the hordes are coming from. Your building placement also matters somewhat: I noticed that placing some food-producing facilities near a lake made them much more efficient, for example. That should at least add a bit of depth to the process of deciding how and where you build your base.

Conan Unconquered has a bit of a budget look and feel to it. The UI is intuitive but a bit ugly, the aesthetic a generic fantasy Age of Empires. My hero repeated the same voice clip every time I gave her a command, and it was some of the worst voice acting I've ever heard repeated ad nauseum. Not exactly the personality I was looking for. I like Arnold Schwarzenegger's Conan the Barbarian quite a bit, but there's nothing here on the level of Arnie punching a camel or James Earl Jones turning into a giant damn snake. God that movie was weird. This game doesn't have any of that flavor, although you can call in a deity's giant foot to stomp the hell out of the bad guys, Monty Python-style. That's actually pretty cool.

Unconquered is derivative, but it's clearly a competent survival RTS, and it's built to support co-op right from the start. That, to me, makes it worth playing. Turtling's simply more fun with a friend.

Wes Fenlon
When he's not 50 hours into a JRPG or an opaque ASCII roguelike, Wes is probably playing the hottest games of three years ago. He oversees features, seeking out personal stories from PC gaming's niche communities. 50% pizza by volume.
See comments