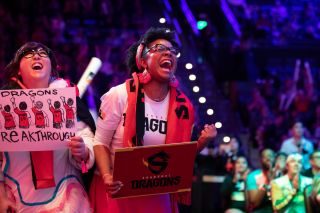 Last week, the Shanghai Dragons beat the top three teams in the Overwatch League to win the title of Stage 3 Champions. They've come a long way since I last poured my heart out over the lovable losers that went 0-40 in Overwatch's inaugural season.

Once that fateful winless season ended, the Dragons gutted most of their roster and coaching staff, replacing them with the remnants of Korean Contenders team Kongdoo Panthera (think of Contenders as the Minors to Overwatch League's MLB). Then, literally two days before the start of Season two, we lost our main tank and signed a new one: Young-jin "Gamsu" Noh. That was massive. Last year I compared the Dragons to my hometown Cleveland Browns. This player pick up was startlingly reminiscent to when the Browns signed Odell Beckham Jr., a superstar come to steer our struggle bus of a team in the right direction.

Back then, I said what all fans of bad teams say: that I'll love the team no matter what, and that wins don't matter. But when your entire team's identity is centered on being the losingest team in the entire history of the sport, winning begins to matter a lot. And when you finally do win, like Shanghai did against Boston way back in Stage 1, winning starts to do ugly things to you.

You can describe a finals game any number of ways. Exciting, boring (depending on the parity between the two teams), thrilling, and more. Watching any game as a Dragons fan can only be described with one word: stressful. It's not fun to watch a Dragons game with me (ask my boyfriend). I'm not loud or cheery or boisterous like a regular fan should be when their team is on the big screen. I am cold, dead, and silent.

That's the duality of fan. Losing sucks because of the specter of the 0-40 season, and winning equally sucks because the pressure of hope and raised expectations is so crushing. It's almost enough to make me miss when they were winless—almost. At least then I could enjoy watching Shanghai's games. I was excitable and loud; I gave myself headaches from all the screaming. But during Shanghai's finals match against San Francisco, I sat like a gargoyle, counting ultimate percentages, deaths, and time banks, waiting for the moment it would all fall apart.

It almost did fall apart, too. The Dragons were up 3-0. One more map and they would have done it. But the Stage finals have never ended with a 4-0. And this is San Francisco—they haven't been swept since Stage 1, and even then it was against New York when New York still looked good enough to be relevant. Staring down the Dragons' three-win lead, San Francisco won one. Then another. Then another. All of a sudden, the match was tied 3-3.

I thought we were finished. We very nearly were finished. And then came the hold on Dorado. The coaches heard fans' collective psychic cry and put Min-seong "diem" Bae back on Widowmaker as god and man intended and he reminded them why it's "Diem Carpe" now.

What makes this victory so special, what allows me to finally breathe again, is that Shanghai had no easy road to victory. They were seeded last coming into the Stage 3 playoffs, but then systematically took down the top three teams—New York, Season 1's most dominant team, Vancouver, an elite squad of newcomers that won Stage 1 this season, and San Francisco, the winner of Stage 2—like wheat before a scythe. For a team like the Dragons, with their record and their history, that's not supposed to happen. Real life rarely rewards the underdogs like this. But this happened, Overwatch became the anime we all believed it was, and I'm able to finally be a normal fan again. I can take joy in their victories and not get so emotional when they lose.

The 0-40 jokes can stop now. In fact, thank the Dragons for being the original sin eaters of the League, taking on that monumental embarrassment and diluting it down so that no team will ever suffer a winless season again, only a winless stage. Casters and journalists have taken to comparing this year's losing teams to the Dragons. They can't do that anymore. Completing a feat like this, the way they did, the comparison should never be made again. The victory has completely canceled all past shame.

But Shanghai should never be ashamed of their inaugural season, as it only makes their current achievements that much greater. And I know, the common refrain from a saltier contingent of fans is, "This isn't even the same team." But Se-yeon "Geguri" Kim and Weida "Diya" Lu are still there. Team managers and staff from the previous season are still there too. Don't discount all of what they endured and how hard they worked just to make an academic point. Besides, we don't talk like that when an NBA franchise wins their first playoffs (paging the Toronto Raptors) so we're not gonna do that here either. The Shanghai Dragons pulled off the greatest series of upsets in all of professional Overwatch and possibly all of esports. Die mad about it.

This entire season Shanghai has been on an ever increasing trajectory:

If they continue on like this, they could very well win the whole damn thing. But Shanghai could also still lose every game in Stage 4, not qualify for the grand finals playoffs, have a greater fall from grace than Lebron's Lakers, and I'd be OK now. Because with no playoff in Stage four in favor of the Grand Finals tournament, and with the League's new format phasing out Stages entirely in the 2020 season, this Stage playoff will be the last one ever played. That means, in the greatest instance of cosmic justice, the Shanghai Dragons, a team that once boasted the worst record in sports history—not just esports history, all of sports history—will be the reigning Stage champions for all time.